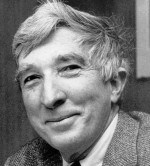 UPDIKE, JOHN [HOYER] (1932-2009). John Updike is the author of over fifteen novels and an impressive body of shorter fiction, poetry, and criticism, much of which has been published in The New Yorker. Born in Pennsylvania, he has lived on the Massachusetts coast since 1957. His fiction typically chronicles the suburban and rural mores of late twentieth-century America, often with gentle satire; “Rabbit” Angstrom, the protagonist of four of Updike’s best-known novels (1960-1990), epitomizes the strengths and weaknesses of white American middle-class culture.

Several of his novels are infused by the environment of their coastal settings, notably Couples (1968), in which the fictional Tarbox was perceived as Updike’s own Ipswich, Massachusetts, and The Witches of Eastwick (1984). In one collection of critical essays, he likens writing criticism to “hugging the shore,” where the writer can “always come about and draw even closer to the land,” while writing fiction and poetry is like “sailing the open sea,” with its “beautiful blankness all around” (Hugging the Shore, 1983, p. xv). Another essay from that collection, “Going Barefoot,” appears in Cape Cod Stories, edited by John Miller and Tim Smith (1996). by Thomas R. Brooks (2000)

This entry was posted in U. Bookmark the permalink.