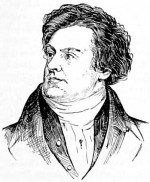 STONE, WILLIAM LEETE (1792-1844). William Leete Stone was a journalist and writer whose career as a newspaperman largely overshadowed his work as a historian. Born in New Paltz, New York, Stone had little formal schooling in advance of his employment with several upstate New York newspapers. By 1821, Stone had purchased, sold, and failed in several newspapers across the area before becoming co-owner of the New York Commercial Adventurer. A Federalist and a Mason, Stone vigorously supported the construction of the Erie Canal, advocated emancipation, and opposed woman’s rights and woman suffrage.

In addition to his newspaper interests, Colonel Stone, as he was known, wrote several books on history, including Life of Joseph Brant (1838), Life and Times of Red Jacket (1841), The Poetry and History of Wyoming (1841), Uncas and Miantonomoh (1842), and Border Wars of the American Revolution (1843). At the time of his death, Stone had written seven chapters of a biography of American Indian leader Sir William Johnson, also called Sa-go-ye-wat-ha, or Red Jacket. Stone’s son, also named William Leete Stone, completed and published this biography (1866) after his father died, including in it a memoir about his father.

Stone wrote two brief travel accounts on the Erie Canal, but there is little in his background to explain two peculiar maritime essays that he wrote in the 1830s. In the first, “The Wreck of the Dead” (Atlantic Souvenir [I831]: 164-93), Stone tells the story of a shipwreck in the Gulf of Saint Lawrence. Set in 1828, the tale follows the survivors of the wreck, who turn to cannibalism before they finally freeze to death. This eerie story seems out of place in the magazine, which published largely light literature and travel stories. Stone’s other sea story, “The Spectre Fire-Ship” (Knickerbocker [1834]: 361-70), is even more bizarre. Set in 1785, the piece also focuses on a shipwreck. The narrator is rescued on board the El Dorado, under the command of a captain consumed by the fear of the devil, who appears on a “fire ship.” When the El Dorado encounters the fire ship, the captain disappears. No sailor ever signed aboard the ship again. Stone wrote for other contemporary periodicals, such as the American Monthly Magazine, but nothing matches these two sea tales for interest and curiosity.

Many years after his father’s death, the junior Stone, oddly, published “The Spectre Fire-Ship” in Potter’s American Monthly (16[1881]: 498-501), a briefer version than his father’s. He gives no rationale for republishing the story, though he does mention that his father got the facts firsthand from one Noah Stone of Oxford, Connecticut, who had them from an eyewitness. The son also published essays on pirates and life on the high seas.

This entry was posted in S and tagged 19th Century, Fiction, Great Lakes. Bookmark the permalink.