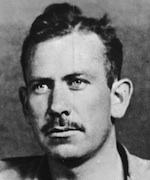 STEINBECK, JOHN [ERNST] (1902-1968). John Steinbeck, winner of the 1962 Nobel Prize in literature, was born in Salinas, California. As a child, he divided his time between his family’s home in the rich agricultural land of the Salinas valley and their summer cottage in Pacific Grove, where he spent many happy hours exploring the shoreline of Monterey Bay. As a writer, he divided his talents between these two environments, the California land and his “home ocean.” To the general public, Steinbeck is best known for his great social reform novel of the Dust Bowl disaster, The Grapes of Wrath (1939; film adaptation 1940), and for stories of California farmworkers and ranchers such as the play-novelette Of Mice and Men (1937; film adaptations 1939, 1992) and the short story “The Red Pony” (1937; film adaptation 1949). To aficionados of sea literature, he is best known as the coauthor, with marine biologist Edward F. Ricketts, of the nonfiction work Sea of Cortez (1941) and as author of the Monterey novels Cannery Row (1945; film adaptation 1982) and Sweet Thursday (1954), though his sea connections are far more extensive than these three works.

Steinbeck attended Stanford University sporadically from 1919 until 1925. In between bouts at school he moved about restlessly, working with Mexican laborers on a sugar beet plantation, helping to build irrigation canals and dams, and sailing from Los Angeles to New York City on board the freighter Katrina, with stops in Panama City and Havana. Steinbeck never completed a college degree but majored in English and took a series of creative writing courses. He also pursued his interest in the sea by enrolling for a 1923 summer session at Hopkins Marine Station, studying marine ecology and participating in field trips and collecting expeditions. After leaving Stanford, Steinbeck took a job as caretaker of a Lake Tahoe cabin in order to write full-time.

In 1929 his parents gave him and his soon-to-be wife, Carol Henning, use of the beach house in Pacific Grove rent-free. The next ten years would be Steinbeck’s most productive decade as an author. His first book, Cup of Gold (1929), was a romantic historical novel about the adventures of the buccaneer Sir Henry Morgan, drawn, in part, from Steinbeck’s Caribbean experiences aboard the Katrina. Tortilla Flat (1935; film adaptation 1942), a comic novel about the lives of poor Mexican American paisanos in the coastal town of Monterey, brought Steinbeck widespread acclaim. Several short story collections and the play-novelette Of Mice and Men were also products of these years.

The Pacific Grove years were dynamic, in part, because of Steinbeck’s intense and influential friendship with marine biologist Ricketts, whose laboratory and biological supply house were not far from the author’s cottage. A pioneering early ecologist and author of the classic handbook Between Pacific Tides (1939), Ricketts contributed greatly to the biological and ecological cast of Steinbeck’s thought, just as the “salon” atmosphere of his lab contributed to the creative energy at large in the Monterey area during the 1930s. Steinbeck would later immortalize Ricketts as “Doc” in the novels Cannery Row and its sequel Sweet Thursday, both bittersweet comedies capturing the magical quality of these years pursuing art, philosophy, beer, women, and marine biology by the sea.

As the Great Depression deepened, so did Steinbeck’s commitment to the plight of migrant workers exploited by California’s almost feudal system of agriculture, with In Dubious Battle (1936) and the Pulitzer Prize-winning The Grapes of Wrath the most notable results. Grapes also brought Steinbeck enough wealth to finance, for himself and Ricketts, a biological expedition to collect marine organisms from the intertidal zones of Mexico’s Gulf of California, also known as the Sea of Cortez. In 1940 Steinbeck and Ricketts chartered Captain Tony Berry and his purse seiner the Western Flyer for six weeks of exploring the Gulf faunal provinces. The resulting “voyage of discovery,” Steinbeck and Ricketts’ Sea of Cortez (1941), is an enduring contribution both to literature of the sea and to marine biology. The first half of the book, “Log from the Sea of Cortez” (published separately under that title in 1951), is a narrative account of the expedition combining marine biology, ecology, mysticism, humor, adventure, and speculative metaphysics. The second half is an annotated phyletic catalog and bibliography of the marine fauna encountered, including more than fifty species unknown to science and significant range extensions for many known organisms.

With the outbreak of World War II, Steinbeck shifted his energies to writing propaganda for the war effort. His saltiest endeavor was a story line for a 1944 Alfred Hitchcock film titled Lifeboat, treating a cross-section of Americans (a female war correspondent, a millionaire businessman, various merchant seamen including an African American and a socialist labor organizer, an army nurse, a young mother and baby) thrown together in an open boat with a German submarine commander after both their freighter and the submarine sink in an Atlantic convoy fray. Shortly after completing the screen story, Steinbeck went to work as a war correspondent in North Africa and Europe; his dispatches are collected in Once There Was a War (1958). He also divorced his first wife and married Gywndolyn Conger. These distractions may be why Steinbeck abandoned his open boat story to Hitchcock and his screenwriters, who would publish their version of “Lifeboat” in Collier’s (13 November 1943). The film (1944), starring Tallulah Bankhead and William Bendix, was a popular success, but Steinbeck was outraged both by Hitchcock’s turning his black character, a man of “dignity, purpose, and personality,” into “a stock comedy Negro” and by the film’s swipes at the merchant seamen’s union.

When the war was over, Steinbeck turned his attention to the sea once more, publishing The Pearl (1947; filmed as La Perla, 1945), a parable garnered from his Sea of Cortez expedition, about a Mexican oyster fisherman who finds a valuable pearl that brings evil to his family. Working with Ricketts, Steinbeck planned a scientific expedition to the Queen Charlotte Islands off the coast of British Columbia, but Ricketts’ untimely death in 1948 spelled an end to their collaboration. In addition to the Cannery Row novels, Steinbeck memorialized Ricketts as “Friend Ed” in the play-novelette Burning Bright (1950), where he appears as captain of a “little freighter” like Katrina.

After purchasing a summer home in the historic whaling community of Sag Harbor, New York, with his third wife, Elaine Anderson Scott, Steinbeck produced The Winter of Our Discontent (1961; filmed for television, 1983), his only Atlantic seaboard novel. Set in a fictional town called Old Harbor, this novel treats the moral decline of Ethan Hawley, a grocer’s assistant descended from whaling captains, and with him the moral decline of contemporary America. Steinbeck’s Travels with Charley in Search of America (1962), a nonfiction account of his drive across the United States with his pet poodle, helped to bring Steinbeck the Nobel Prize in that year. Its memorable maritime scenes include Steinbeck’s opening battle at Sag Harbor to secure his twenty-two-foot cabin cruiser Fayre Eleyne in the teeth of Hurricane Donna and his reunion with the Pacific after the cross-country drive.

Steinbeck never lost his interest in marine science. In 1961 he was invited by oceanographer Willard Bascom to become historian for the Mohole Project, an attempt to drill a hole from the bottom of the sea through to the earth’s mantle. Steinbeck accompanied geologists, petrologists, zoologists, oceanographers, and engineers aboard the drilling barge CUSS I off San Diego and wrote about the experience for Life magazine (“High Drama of Bold Thrust through Ocean Floor,” 14 April 1961) and Popular Science (“Let’s Go after Neglected Treasures beneath the Sea,” September 1966). Although the Mohole Project was unsuccessful in reaching the earth’s mantle, it did result in new technology for exploiting undersea mineral wealth. Such interests were not incompatible with Steinbeck’s concerns about marine conservation: overfishing, poisoning of nearshore waters with sewage and industrial runoff from rivers, and dumping atomic waste in the sea. These subjects are discussed in a number of his works, including his last published book, the essay collection America and Americans (1966).

At Steinbeck’s death, his family scattered his ashes into the Pacific from a cliff on Monterey’s Point Lobos overlooking Whalers Bay, a cove where he had played as a child.