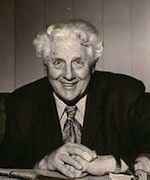 Many of his titles include stories recycled from earlier books or from newspaper columns he wrote for Boston-area newspapers. Well known in New England as a raconteur, Snow did not hesitate to tell his own story in his books. He was proud of his seafaring ancestry and included a chapter about his mother in his book Women of the Sea (1962). The daughter of Captain Joshua Nickerson Rowe, Alice Rowe Snow spent some fifteen years at sea with her parents aboard the schooner Village Belle, the brig J. Bickmore, and the bark Russell. As the “Flying Santa,” Snow began, in 1936, to fly Christmas presents to lighthouse keepers around New England, many of whom figured in his books. The character of the hack historian Leslie Everett Dove in Peter Landesman’s The Raven (1995) is modeled on Edward Rowe Snow.

Great Storms and Famous Shipwrecks of the New England Coast (1943)

This entry was posted in S and tagged 20th Century, Maritime History, Nonfiction. Bookmark the permalink.