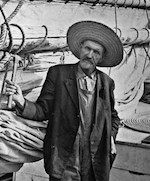 SLOCUM, JOSHUA (1844-1908?). Joshua Slocum, the first singlehanded circumnavigator and author of the classic Sailing Alone Around the World (1900), was born in Nova Scotia. At about sixteen he left home to work as a deepwater sailor and by 1869 commanded his first vessel. In 1871 he married Virginia Walker, who, along with their children, sailed with him until she died in 1884. About two years later he married his cousin Henrietta (“Hettie”) Elliott, and for their wedding trip the couple went to sea on the Aquidneck, which he owned. On this inauspicious voyage, Captain Slocum killed a man in putting down a mutiny, and the uninsured ship was wrecked in Brazil and was a total loss. From its wreckage, however, Slocum built a thirty-five-foot “canoe” and sailed the Liberdade 5,500 miles to Washington, D.C. Hettie never again accompanied him to sea. By that time the age of sail was almost over, as was Slocum’s career as a merchant captain on sailing vessels. He tried authorship, publishing The Voyage of the Liberdade in 1890 but making no money on it. When in 1892 a retired whaling captain gave him the hulk of an old oyster sloop named Spray, Slocum rebuilt it and tried fishing for a time. By 1894 he had published another book, Voyage of the Destroyer from New York to Brazil, recounting the sad story of his commission to deliver to Brazilian authorities an iron gunboat built by John Ericsson, designer of the Civil War Monitor. The boat sank in harbor in Bahia, and Slocum went unpaid. The book, too, was a financial failure.

His next venture, the boldest till then, was to take the Spray on the world’s first single-handed circumnavigation. In April 1895 he left Boston harbor, reportedly with only $1.50 in cash. Sailing without a chronometer and altering his planned course at times to avoid various threats, including piracy, Captain Slocum crossed and recrossed the Atlantic and struggled through the Straits of Magellan into the Pacific. Thence he sailed to Australia, through the Coral Sea and the Indian Ocean, around the Cape of Good Hope, and, crossing the Atlantic once again, ended his 46,000-mile voyage in the United States on 27 June 1898.

Sailing Alone Around the World, serialized in 1899-1900 and published as a book in 1900, is a classic of nautical literature not only because of its pioneering tale of seamanship but more so because of Slocum’s distinctive character and voice. His practical realism about the sea and its dangers and his immense, but understated, skill as a seaman, combined with his appreciation not only for the Spray but for natural and human beauty, make his account engaging to sailors and armchair adventurers alike. An easy literary concord results from his remarkable competence with both tiller and pen. Slocum’s love of his vessel, narrative skill, modesty, honesty, realism, and dry wit account for the book’s reprinting in every decade since its appearance. Once he had shown the appeal of what he had done, others followed in similar ventures and wrote about them, making Slocum the inaugurator of a genre: solo circumnavigation accounts. Not only was he imitated, but many replicas of Spray have been built.

Despite excellent proceeds from the book and from lecturing, Slocum was not happy. He made solitary trips in the Spray to winter in the Caribbean. Among the incidents of his life at this time was a charge of rape during a lecture stop in New Jersey. It was medically disproved, but he spent over a month in jail. Not long afterward he delivered a rare Caribbean orchid to President Theodore Roosevelt.

Finally, at age sixty-five, Slocum made perhaps his boldest plan: to sail the Spray to South America, up the Orinoco and Rio Negro, to the still mysterious sources of the Amazon, down the Amazon to the sea, and back to New England. He left in stormy weather; neither he nor his boat was ever seen again. A court finally declared him officially dead as of the day he set sail: 14 November 1909, although historians believe now the year was likely 1908.

Sailing Alone Around the World (1900)

Fierlinger, Paul and Sandra. Animated Documentary: Slocum at Sea with Himself. 2015.