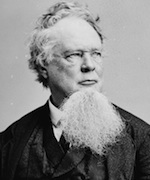 SIMMS, WILLIAM GILMORE (1806-1870). William Gilmore Simms was born in Charleston, South Carolina, where he spent most of his life. He was, with the exception of Edgar Allan Poe, the most significant author of the antebellum South. Beginning as a lawyer, Simms soon turned to his true love, writing, and became a prolific author, penning more than eighty volumes. Two-thirds of these are devoted to poetry, drama, short stories, and novels and romances; the remainder, to history, geography, biography, and miscellaneous nonfiction. A major editor and reviewer, Simms was an outspoken advocate of the South and its institutions, in particular, slavery and secession. His support of these positions permeated his fiction, his essays, and his lectures and won him a term as a state legislator but prevented objective evaluation of Simms’ work until well into the twentieth century. Financial losses during the Civil War required increased literary effort, which probably hastened his death.

Simms wrote almost 2,000 poems, the majority dealing with nature. Because he was a romantic and a Charlestonian, Simms used the sea as his subject for some; sea imagery appears occasionally in others. His most ambitious undertaking in this genre, the long, dramatic poem Atalantis, a Story of the Sea: In Three Parts (1832), tells of a sea fairy who escapes the advances of a sea demon and marries a mortal. Critics find the work heavily indebted to Lord Byron.

Simms’ one novel-length work of the sea is The Cassique of Kiawah: A Colonial Romance (1859). The story, set in seventeenth-century South Carolina, recounts both life aboard a pirate ship and American Indian warfare. Although one of his favorites, the romance is largely unknown because it was omitted from the definitive edition of Simms’ works, first published in the 1850s and reprinted several times thereafter.

The Cassique of Kiawah: A Colonial Romance (1859)

This entry was posted in S and tagged 19th Century, Fiction, Poetry. Bookmark the permalink.