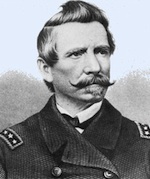 SEMMES, RAPHAEL (1809-1877). A naval officer first in the United States and then in the Confederate navy, Raphael Semmes wrote two books on his naval adventures. The first, Afloat and Ashore during the Mexican War (1851), is an account of his service during that conflict. In the early portion of the work, the only part concerned with the sea, Semmes relates his service during the naval blockade of Vera Cruz. After the surrender of that city, he became attached to a party sent to rescue an American midshipman accused of spying. The remainder of the book contains his observations on the country and people and his recounting of the American army’s victorious march to Mexico City.

Unlike Afloat and Ashore, Semmes’ second work, Memoirs of Service Afloat during the War between the States (1869), is essentially a tale of the sea. Semmes’ voyages in the Sumter and the Alabama and his return to the postwar South as well as his arguments for the Confederacy’s position are the major topics of this book. In this second effort Semmes is a far more self-conscious literary artist. He employs foreshadowing to heighten dramatic tension: when he describes the christening of the Alabama, for example, he also predicts her later demise off the coast of France. His depiction of the battle between the Hatteras and the Alabama is, like the engagement itself, brief but exciting. Semmes’ descriptions of storms at sea lend drama to his narrative of the perils faced by the crews of the privateers, and his explanations of the effect of weather and ocean currents on shipping and seamanship are clear and illuminating.

Although Semmes’ first work was a best-seller, his second attracted little attention outside the South because of the author’s partisan approach to his material. Despite the lack of public enthusiasm, Semmes’ Memoirs is a literary accomplishment.

Afloat and Ashore during the Mexican War (1851)