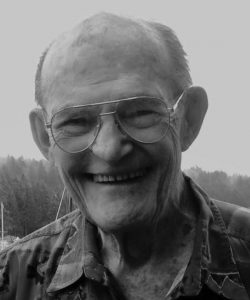 SEARLS, HENRY HUNT “HANK,” JR. (1922-2017). Novelist and author of nonfiction and short fiction, Hank Searls was born in San Francisco 10 August 1922. Graduated from the U.S. Naval Academy in 1944 with the wartime-accelerated class of 1945, he remained an active-duty naval officer until 1954. He served in the Pacific as a gunnery officer on U.S.S. Washington and later with air photo reconnaissance squadrons mapping Labrador and Newfoundland. Indeed, it was at 20,000 feet in a B-24 flying over Newfoundland that Searls began writing, initially detective and aviation short fiction.

His thrillers ofien involve aviation or aquatic themes; he wrote novelizations of the movies Jaws 2 (1978) and Jaws: The Revenge (1971). Kataki (1987) fictionalizes George Bush’s World War II experiences as a navy pilot in the Pacific. Also set in World War II, The Hero Ship (1969) involves an American carrier heavily damaged by kamikazes, inspired by the near sinking of the U.S.S. Franklin, whch Searls witnessed. In the early 1970s Searls and his wife sailed the South Pacific, a voyage he made use of in Overboard (1977), where a man and wife try to resolve relational differences while sailing the South Pacific. Sounding (1982) is a remarkable modern counterpart to Moby-Dick (1851), with a whale-protagonist as a thoroughly developed character yet still “very like a whale.”

Perhaps Searls’ best-known book is the nonfiction The Lost Prince: Young Joe, the Forgotten Kennedy (1969), about the Kennedy brother whose plane was shot down over France on a special mission during World War II.