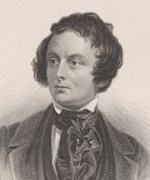 SARGENT, EPES (1813-1880). A Boston newspaperman and son of a Gloucester sea captain, Epes Sargent is best remembered as the author of the lyrics of one of the best-known nautical songs of the nineteenth century. In addition to American Adventures by Land and Sea (1841) and other works meant for a schoolhouse audience, Sargent was the author of several historical romances, a few comic pieces, two books on spiritualism, and a number of poems and sonnets. But his fame rests on the single poem, “A Life on the Ocean Wave,” which was set to music by Henry Russell and published about 1838. The song was an instant hit, not only among the public ashore who were inspired by its romantic imagery of the jaunty sailor class but by seafarers, who longed to live the life it described. The poem later appeared in Sargent’s anthology Songs of the Sea with Other Poems (1847), but it was as song lyrics that it continued to be reprinted into the twentieth century.

American Adventures by Land and Sea (1841)

This entry was posted in S and tagged 19th Century, Fiction, Poetry. Bookmark the permalink.