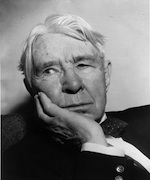 SANDBURG, CARL [AUGUST] (1878-1967). Carl Sandburg, poet, historian, journalist, novelist, labor organizer, folksinger, and collector of American dialect, was born to Swedish immigrant parents in Galesburg, Illinois. Sandburg early understood the beauty, power, and destructiveness of water. He experienced the sea through service in Puerto Rico during the Spanish-American War and as a foreign correspondent in Sweden from late 1918 to early 1919. Residence in Milwaukee from 1907 to 1912 and in Chicago from 1912 through the early 1940s provided regular contact with Lake Michigan. In his poem “North Atlantic” in Smoke and Steel (1920), Sandburg alludes to his sea-loving, seagoing ancestry.

Approximately thirty Sandburg poems make significant reference to the Great Lakes or the sea. Short, imagistic poems such as “Fog” in Chicago Poems (1916) present bodies of water as sources of pure aesthetic beauty. In “The Harbor,” also from Chicago Poems, Lake Michigan offers seagulls an aesthetically liberating and sustenance-providing environment far better than that available to the downtrodden poor in Chicago’s ghettos. Poems like “Young Sea” from Chicago Poems, “The Sea Hold” from Cornhuskers (1918), and “Far Rockaway Night till Morning” and “Flying Fish” from Smoke and Steel portray the oceans as wise, loving companions and complements to men, even those who know that their chosen professions will ultimately lead to their deaths at sea.

“North Atlantic” and “Bones” from Chicago Poems present the sea as an elemental, cosmic power adopting many roles and faces, ever calling to men and eliciting moods from dream, to adventure, to desperate loss. In other poems, like “Under” from Chicago Poems, the sea is an unconscious and uncaring primal power. It makes clear human insignificance in the cosmic order. Poems like “Docks” from Chicago Poems and “Sea Wash” from Smoke and Steel portray the seas as great and endlessly restless bodies whose eternal motion and change capture and reflect the ebb and flow of the universe. Sandburg often presents the seas as age-old sources of death and life. In “Baltic Fog Notes,” for example, from Smoke and Steel, Sandburg presents life at sea as joyful, rigorous, full of adventure, and compelling, offering an attractive alternative to life and death ashore.

Sandburg’s early poetry contains the most frequent and most central references to the sea and the Great Lakes. Ultimately, Sandburg’s explorations make it clear that his dominant usage of the sea is aesthetic rather than philosophical. For him, the land, not the sea, provided the major inspiration. by Philip A. Greasley (2000)