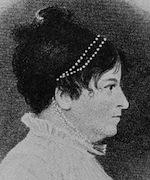 ROWSON, SUSANNA H[ASWELL]. (1762-1824). Born in Portsmouth, England, Susanna H. Rowson became an actress, educator, prolific writer in several genres, and notably the author of Charlotte Temple (1791), America’s first best-selling novel. Rowson’s father, William Haswell, was a lieutenant in the British Royal Navy, and her childhood and adolescence were marked by personally and politically traumatic ocean passages that she later recalled in numerous novels and other writings. In these works the ocean consistently figures as a medium of both crisis and communication, a marker for the far-reaching social, economic, and cultural disruptions and transformations of the Revolutionary period.

Rowson’s mother, Susanna, died giving birth to her, and she was left behind in England in her first year of life, when her father voyaged to Nantasket, Massachusetts, to serve as a collector of royal customs revenue. In 1766, when Rowson was five, he returned to take her to America. The crisis-ridden translatlantic crossing that ensued is vividly dramatized in her autobiographical novel, Rebecca, or the Fille de Chambre (1792). The novel recounts how Rowson’s ship was nearly sunk in a hurricane and blown far off course, her experience of severe rationing and near starvation, and the ship’s final disaster running aground in an ice storm near Lovell’s Island entering Boston harbor.

Rowson’s second transatlantic crossing, at age sixteen in 1778, was marked by political as well as personal crisis. After her father was made a prisoner of war during the Revolution, Rowson’s family had their property confiscated and lived in extreme poverty and internal exile for over two years before sailing back to England penniless, as part of a prisoner exchange. Problematic crossings figure as emblematic rites of passage in several of Rowson’s other novels: Victoria (1786), Mary, or the Test of Honour (1789), Charlotte Temple, and Reuben and Rachel; or, Tales of Old Times (1798).

On her third and final transatlantic passage in 1793, Rowson returned to America as a thirty-one-year-old author and actress. She remained in the United States the rest of her life, becoming an American citizen in 1802. In key works written soon after her return to the post-Revolutionary United States, such as the play Slaves in Algiers: or, A Struggle for Freedom (1794) and the song “The Sailor’s Landlady” (1794, also referred to as “America, Commerce, and Freedom”), Rowson develops explicit links between seafaring, the violent political crises of the time, and the liberal doctrine of commerce as the primary means of social improvement in the post-Revolutionary era.

In Charlotte Temple, Charlotte’s loss of “innocence” during the transatlantic passage allegorizes the loss of political “virtue” that was a key concept in Republican political theory of the era. Similarly, the communication of ideas and goods in maritime commerce is explicitly linked to Revolutionary ideals of liberty in Slaves in Algiers and brings about democratic bounty and well-being in “The Sailor’s Landlady.” In this song, one of the most popular of the 1790s, American sailors celebrate the wealth created by oceangoing commerce, singing:

Then drink round my boys, ’tis the first of our joys
To relieve the distress’d, clothe, and feed ’em.
‘Tis a duty we share, with the brave and the fair,
In this land of commerce and freedom.

Second only to her emphasis on women’s experience, the transatlantic passage and maritime commerce figure in Rowson’s novels and other writings as key sources of personal and political iconography.