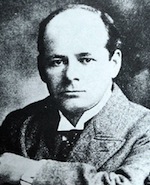 ROBERTSON, MORGAN (1861-1915). Son of a Great Lakes captain, Morgan Robertson was born in Oswego, New York, on Lake Ontario. He wrote popular sea fiction with the authoritative voice of an expert seaman. Sailing from 1877 to 1886, he first shipped out on a Great Lakes vessel before exploring the oceans. Coinciding with the transition from sail to steam propulsion, Robertson’s time at sea was spent on both vessel types. His fresh and saltwater voyages familiarized him with much of the globe, and by age twenty-one, Robertson had risen from cabin boy to first mate.

Robertson held many jobs–jeweler, watchmaker, inventor, cowboy, swimming instructor–before, at age thirty-six, he tried his hand at writing, the craft that was to occupy him for the rest of his life. His fourteen books, numerous short stories, and articles are almost all connected to the sea or the Great Lakes. He wrote with a remarkable degree of technical accuracy and creative energy. Technological changes that he witnessed fueled his imagination about the future and inspired his speculative fiction, such as Futility: Or, The Wreck of the Titan (1898). This novel, with its famous Atlantic liner Titan, wrecked on an iceberg one April night, eerily prefigures the wreck of the Titanic in 1912. Some of his work, including Down to the Sea (1905), is comic, ranging from lighthearted to mordant. Often his writing conveys his Darwinian ideas and mystical beliefs, as in Where Angels Fear to Tread (1899). Praised for his breezy style and his clever plots, Robertson’s use of precise sea terminology has drawn both acclaim and criticism.

Ever on the verge of making his fortune, Robertson died nearly impoverished, standing up and staring seaward from a cheap room in Atlantic City. Royalties from his books later made his widow financially independent. Robertson’s best-known works include Masters of Men (1901), Shipmates (1901), and Sinful Peck (1903). by Donald P. Curtis (2000)