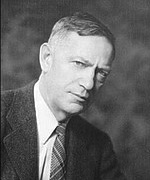 RIESENBERG, FELIX (1879-1939). Felix Riesenberg was one of the most important figures in American literature of the sea during the 1920s and 1930s; his literary contributions were preceded by many years of first-hand sea experience during the final transitional years from sail to steam. Following the example of his father, a German sailor who went to sea at age thirteen, Riesenberg went to sea in 1895 at age sixteen. In 1898 he made his first of many Cape Horn passages, sailing as an ordinary seaman aboard the A. J. Fuller, under the command of Charles M. Nichols. Later he began his career in steam as a cadet on the ocean liner St. Louis. He navigated the airship America in the Wellman Polar Expedition of 1906-1907 and eventually commanded the New York state school ship, U.S.S. Newport, from 1917 to 1919 and then again from 1923 to 1924.

His experience on the Newport coincides with his publishing two manuals of seamanship that were widely used for years, The Men on Deck (1918) and Standard Seamanship for the Merchant Service (1922). Also in 1918 he published the first of two autobiographical works, Under Sail, an account of his experiences aboard the A. J. Fuller intended to inform his readers of “that phase of our sea life that formed and forged the link between the old and the new present of the America of steam and steel” (10-11). This was also his goal in his most important and still very readable novel Mother Sea (1933), in which his central character Clyde Nicholson recalls Captain Charles Nichols of the Fuller. Riesenberg was an associate editor and wrote a regular column for the Nautical Gazette. In 1931 he coauthored a sea novel, Maiden Voyage, with Archie Binns and in 1937 published Living Again: An Autobiogaphy, a work focused on, among other things, his sea experience during the transitional years between sail and steam. by Bert Bender (2000)

Standard Seamanship for the Merchant Service (1922)

This entry was posted in R and tagged 20th Century, Fiction, Nonfiction. Bookmark the permalink.