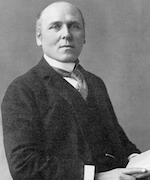 PYLE, [JOHN] HOWARD (1853-1911). Howard Pyle was one of America’s foremost artists of children’s books, and he exerted a dramatic influence on generations of book illustrators. Pyle was born in Wilmington, Delaware. Until attending art school, he was an admittedly mediocre student. A visit to Chincoteague Island, Virginia, in 1876 inspired a submission of drawings and an article to Scribner’s Monthly Magazine (April 1877) that described the island, its people, and the annual wild pony roundup. His publishing and illustrating career began with the acceptance of this article and two short children’s works. Medieval English legends provided the source for most of his work; his tales of King Arthur and of Robin Hood are classics and are still in print many decades later.

A turning point in Pyle’s early career came with ” ‘Wreck in the Offing!’ ” (Harper’s Weekly, 9 March 1878, p. 202), depicting a frightened man at the door of a lifesaving station, pointing to the storm outside. Unlike his previous “idea sketches” for magazines, Pyle convinced Harper’s editors to allow him to create the final illustration, and the editors published it as a double-page spread. “North Folk Legends of the Sea” (Harper’s Monthly Magazine January 1902), written and illustrated by Pyle, featured some of the earliest successful color magazine reproductions. Pyle produced numerous other sea-related stories and pictures throughout his career; many were collected in the posthumous Howard Pyle’s Book of Pirates (1921), which recounts the escapades of various cutthroats in dramatic stories and illustrations. Pyle’s single visit to Europe ended with his untimely death in Florence, Italy.