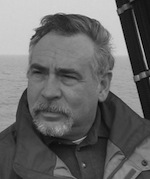 POYER, DAVID [ANDREISSEN] (1949- ). David Poyer graduated from the U.S. Naval Academy in 1971 and is a naval reserve captain, experienced sailor, and underwater diver. Poyer adapted his active-duty navy experiences to write best-selling sagas of naval fiction. The Med (1988), The Gulf (l990), The Circle (1992), The Passage (1995), Tomahawk (1997), and China Sea (2000) chronicle the adventures of protagonist Dan Lenson from the time he reports to his first ship after graduating from the Naval Academy in Annapolis through his career in the surface-ship navy. These books, in the tradition of Joseph Conrad and Herman Wouk study human conflict aboard Lenson’s vessels at sea during modern naval battles and raging storms.

Poyer has also used his diving background in a series of novels that chronicle the adventures of commercial diver Tiller Galloway. In Hatteras Blue (1989), Galloway discovers gold on a sunken German U-boat off the Carolina coast. Louisiana Blue (1994) and Bahamas Blue (1991) follow Galloway’s struggle to avoid the temptation of drug-running, which had earlier landed him in jail. Galloway is in his element underwater rather than ashore awaiting his next diving job. Working in the depths of the sea, where the community is small and the camaraderie is usually tight, helps Galloway survive dry-land evils and resolve personal conflict.

The sea is home to Poyer’s characters. Substantial problems occur onshore; at sea they get resolved or forgotten as the sea tests the characters. On the water, failure means death, whether on the bridge of Lenson’s warship or in the depths of Galloway’s latest dive.