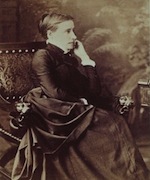 PHELPS ELIZABETH [STUART] (1844-1911). Growing up in Andover, Massachusetts, Elizabeth Phelps was a lifelong resident of New England and had a summer home in Gloucester. She was a staunch feminist who participated in causes that ranged from temperance to conditions of factory workers. Though the main theme in her fifty-seven books is the plight of women, three titles contain connections to the sea. The Story of Avis (1877), set on the coast, is about a young artistic woman whose career suffers due to her marriage and who longs to fit her expression to the voice of the sea; the woman’s conflicts are described in rich sea imagery. An Old Maid’s Paradise (1879) describes two women who attempt to live independently on the seashore. Jack the Fisherman (1887) focuses on an alcoholic fisherman who tries to rise above his lot in life.

This entry was posted in P and tagged 19th Century, Coastal Life, Fiction, Fishing, Gender/Sexuality and the Sea, Women Protagonists. Bookmark the permalink.