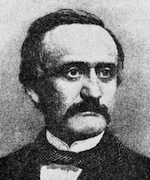 [PETERSON, CHARLES JACOB], “HARRY DANFORTH,” “J. THORNTON RANDOLPH” (1819-1887). Charles Jacob Peterson was an editor, publisher, and historian, born in Philadelphia, where he worked all his life. Once he acquired an ample fortune, he and his wife purchased a mansion in Newport, Rhode Island, enjoyed its summer beach and coastal activities, and in 1866-1867 voyaged to Europe.

While founding, editing, and contributing to his popular Peterson’s Magazine and managing a publishing house, Peterson wrote poetry, novels, and historical chronicles. One slim story has a sea setting, “The Disguised Frigate” in Sartain’s Union Magazine of Literature and Art (April 1851). His Cruising in the Last War (1850) treats sea activity during the Mexican War.

Only Peterson’s patriotic histories of American military and naval heroes have stood the test of time. Although emphasis in many of his books is placed on land heroes, Peterson does justice to sea figures as well, treating them exclusively in his best-known and most influential book, A History of the United States Navy, and Biographical Sketches of American Naval Heroes from the Formation of the Navy to the Close of the Mexican War (1852). In its preface, Peterson admits that the lives of well-known American naval captains and the American navy have been amply treated by historians and authors, notably James Fenimore Cooper. He asserts that his work is unique because it combines history and biography, that his sources include old magazines and newspapers, and that only the inaccuracy of available data forced him to exclude treatment of American privateers.

The book itself is divided into two unequal parts. The first briefly sketches early sea activity and the growth of sea power to oppose Great Britain, Tripoli, and Mexico. The longer, second part extols thirty-six naval heroes. Sketches include John Paul Jones, Oliver H. Perry, and Matthew C. Perry, hero at Vera Cruz and negotiator of a pact that opened up Japan to Western commerce. One unattractive subject is Jesse Duncan Elliott, whose delay in aiding Oliver Perry on Lake Erie against the British in 1813 Peterson tries to explain away but cannot. Peterson’s favorite subjects are Stephan Decatur, hero at Tripoli during and after the War of 1812; Isaac Hull, commander of “Old Ironsides” against the British frigate Guerriere; and Charles Stewart, a success against French privateers, Tripolitan pirates, and the British from 1800 to 1815.

History of the United States Navy: and biographical sketches of American Naval Heroes from the Formation of the Navy to the Close of the Mexican War (1852)