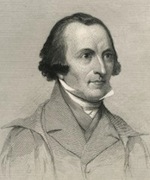 PERCIVAL, JAMES GATES (1795-1856). Though he often mentioned the ocean in his poetry, James Gates Percival made little use of direct observation. As state geologist for Connecticut, he mapped the landforms along the Atlantic and Long Island Sound. But in verse he seldom drew on this knowledge. He followed instead the practices of his eighteenth-century predecessors, preferring to write of the abstract and the grand. His 110-line poem “Sea Pictures” (1823) describes ocean winds as “softly breathing o’er the marble main,” with the result that “they smooth its billows to a liquid plain.” The speaker in the 1,075-line “The Wreck” (1823) works to present not actualities of the sea but, as he puts it, the sea’s “beauty and sublimity.” Such verse was lauded in its day but was less esteemed once William Cullen Bryant and Henry Wadsworth Longfellow began to publish.

Percival is perhaps best remembered as a geologist and an assistant to Noah Webster.