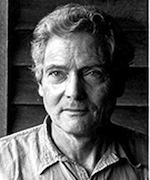 Merwin’s poetry is distinguished by its close attention to the natural world and to the ways in which language is used to mediate and express the human experience of nature. In his poetic meditations upon the numinous quality of the physical world, Merwin has often focused his artistic eye upon the sea and its shores. The third section of Green with Beasts (1956) is centered upon images of the ocean, while the first twelve poems of The Drunk in the Furnace constitute a formal sequence of sea poems that includes mythic treatments of the sea, as in “Odysseus,” and imaginative explorations of the northern oceans, as in “The Frozen Sea.”

In the late 1960s Merwin’s sea poetry began to focus upon the degradation of marine environments. “For a Coming Extinction” (The Lice), one of his many poems about whales, laments the arrogance that has driven humans to crave mastery over the creatures of the sea. In later poems, such as “Sunset Waters” (Opening the Hand) and “Anniversary on the Island” (The Rain in the Trees), seascapes are used to explore the richness and complexity of human family and love relationships. In recent poems, the abiding presence of the sea and shores of Merwin’s home landscape of Hawai’i are central to his poetic vision.

This entry was posted in M and tagged 20th Century, Pacific Islands, Poetry. Bookmark the permalink.