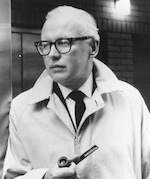 MacDONALD, JOHN D[ANN]. (1916-1986). Best known for his creation of tough-guy detective Travis McGee, suspense novelist John D. MacDonald lived for many years in South Florida and set much of his work there. In his novels the sea functions both as a paradisiacal retreat from the commercialized Florida landscape and as an inviting backdrop for evil deeds. McGee himself lives on a houseboat, the Busted Flush; his adventures often have seagoing interludes or episodes, including violent climaxes on boats in The Deep Blue Goodbye (1964) and Bright Orange for the Shroud (1965). MacDonald’s greatest sea story, however, entitled The Last One Left (1967), is outside the McGee series. This novel features murder at sea, a survivor adrift, betrayal among thieves, and buried loot. Characteristically, MacDonaid demonstrates a sure touch with both a variety of high- and low-life characters and the subtropical settings they inhabit. by Philip J. Egan (2000)