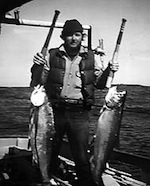 KÖEPF, MICHAEL (1940- ). Born in San Mateo, California, Michael Köepf is the son of a commercial fisherman. He grew up fishing and draws on his experiences as a commercial fishing-vessel captain for his novel The Fisherman’s Son (1998). The protagonist, Neil Kruger, is adrift in a raft off the California coast, his fishing boat wrecked and his brother killed by a comber. His recollections while he floats include his mother’s displeasure at the fisherman’s life, his father’s fishing companions being lost at sea, and his own purchase of a fishing boat after his father’s death. Dazed with hunger, exposure, and thirst, he imagines himself located by search parties. An earlier novel, Save the Whale (1978), follows a Vietnam veteran whose whale-watching leads him to intrigue and danger from duping well-meaning environmentalists by collecting donations for a bogus Save the Whale campaign.

This entry was posted in K and tagged 20th Century, Fiction, Fishing, Whaling/Sealing. Bookmark the permalink.