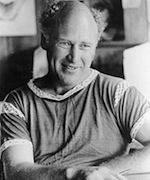 KESEY, KEN [ELTON] (1935-2001). Ken Kesey was born in La Junta, Colorado, and soon moved to Oregon, where he now lives. He developed a love of hunting and fishing as a child, and much of his writing employs the lush natural settings and small towns of the Pacific Northwest as fitting places for discussions of the economic exploitation and potential barbarity of the institutionalized management of natural resources, communities, and people.

Near the end of Kesey’s One Flew over the Cuckoo’s Nest (1962), the protagonist, Randle McMurphy, leads a band of inmates from a mental hospital on a fishing trip off the Oregon coast. This trip provides the inmates with a renewed sense of the “normal” world from which they have been exiled and concludes with their doctor’s catching an abnormally large flounder. The trip provides the inmates with a sense of community and freedom that is contrasted with the strictures of the institution from which they have escaped. It has been suggested that the flounder represents, among other possibilities, the inmates’ long-denied opportunity to liberate themselves from their problems and to expand their spirits and horizons. The 1975 film adaptation starred Jack Nicholson.

Kesey’s later novel Sailor Song (1992) is set in a remote fishing village in Alaska and includes a colorful cast of characters, most of whom make their living from fishing. When the son of one of the town’s leading citizens invades the community with a Hollywood camera crew intent on filming a famous children’s story about a Native American tribe, conflict ensues between those eager for the economic boom that the film will surely provide and those who suspect more sinister motives behind the filmmakers’ presence. Much of the book’s action takes place on luxurious yachts moving up and down the Alaskan coast. Omnipresent in the novel is a double vision of the sea as both a place of destruction and one of overwhelming fecundity.