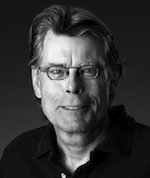 KING, STEPHEN [EDWIN] (1947- ). Although Stephen King sets much of his best-selling fiction in Maine, the New England coastal state of his birth and residence, he rarely writes about the sea. King has written dozens of horror, fantasy, and science fiction novels, novellas, short stories, and screenplays, including Carrie (1974; film adaptation 1976), Pet Sematary (1983; film adaptation 1989), Tommyknockers (1987; film adaptation 1993), and Bag of Bones (1998). Most of his works are best-sellers, and many have been made into major motion pictures.

“Survivor Type,” first published in Terrors (1982), then later published in King’s short story collection Skeleton Crew (1985), describes a shipwrecked man who resorts to eating himself. Storm of the Century (1999) produced as a television screenplay (1999) prior to publication, focuses on a fictional island and a lighthouse off the coast of Maine that is hit simulultaneously with a massive snowstorm and the appearance of an evil sorcerer named Linoge. King describes tidal storm surges that destroy fishing vessels, the town dock, and the lighthouse. If they will not comply with his wishes, Linoge threatens to force all of the islanders to walk to their death into the sea in the same way that he claims the members of the lost colony of Roanoke Island did.