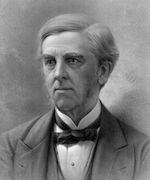 HOLMES, OLIVER WENDELL (1809-1894). Oliver Wendell Holmes, a writer and distinguished academic physician, spent his life around Boston. He was the social leader of a group of intellectual luminaries that included Henry Wadsworth Longfellow, James Russell Lowell, and Ralph Waldo Emerson. In his day a well-known wit and after-dinner speaker, Holmes is now remembered for a handful of poems, some about the sea.”Old Ironsides,” the poem that made him known, first appeared in a Boston newspaper in 1830. This elegy was his emotional protest against plans to tow the famous frigate U.S.S. Constitution to a scrap yard. Instead, says the poem, she ought to set out to sea in a storm, unmanned and under full sail. Republished in newspapers and broadsides nationwide, the poem galvanized public opinion in favor of preserving the frigate. “The Chambered Nautilus,” arguably Holmes’ best poem, first appeared in the February 1858 issue of The Atlantic Monthly, a magazine that he had named and helped to found. The ode describes a sea creature that expands its beautiful spiral shell to accommodate its physical growth; inspired by the example of this image, the poet then urges the human soul onward to achieve similar spiritual growth.

Other sea-related poems deserve attention. Among his serious poems, “La Maison D’or” (1890) compares life to a sea voyage, and “The Steamboat” (1840) celebrates technology. Among his light verse, “The Old Man of the Sea” (1858) pokes fun at tiresome tellers of sea stories; “A Sea Dialogue” (1864) contrasts a gabby passenger with a silent seaman; and “Ballad of the Oysterman” ( 1830) parodies tales of ill-fated lovers.

Critics find Holmes’ poetry excessively sentimental for modern taste, but his best verse has the power to charm through forthright feeling, sharp wit, and vivid imagery.

This entry was posted in H and tagged 19th Century, Poetry. Bookmark the permalink.