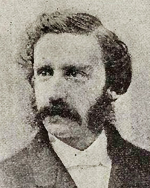 HARTE, [FRANCIS] BRET[T] (1836-1902). Born in Albany, New York, Bret Harte rose to literary prominence as editor of the Overland Monthly (first pub. 1868), a San Francisco-based magazine of western lore. In this forum Harte produced his best sketches, stories, and poems, including “The Luck of Roaring Camp” (August 1868), “The Outcasts of Poker Flat” (January 1869), and the satirical poem “Plain Language from Truthful James,” better known as “The Heathen Chinee” (September 1870). Following his return to the East Coast in 1871, Harte lectured extensively about the Pacific coast and eventually produced his best-known novel, Gabriel Conroy (1876). The tepid reception of his novel, a sign of ebbing interest in his stories, convinced Harte to accept a consulate in Prussia in 1878 and later in Scotland in 1880. He remained in Europe, where interest in his writing continued throughout his lifetime.

Harte romanticized the hardy souls who settled California and the hardships they endured, using themes and metaphors drawn from the sea. In “The Luck of Roaring Camp” and in “Notes by Flood and Field” (1870), in which various rural settlements along estuaries of the Pacific Ocean are inundated with floodwaters from the Sierra Mountain range, Harte depicts nature as unpredictable and wild. In a similar vein, “High-Water Mark” (1870) is the tale of a woman whose home is consumed by the rising tide of the nearby Pacific Ocean and of her struggle for survival aboard a fallen tree. The power of the wild waters rushing to the sea symbolizes the adversity faced by the inhabitants of this new frontier, generating awe and respect for both sea and Westerners.

In “The Outcasts of Poker Flat,” a story evoking thoughts of the ill-fated Donner party, swells of snow that consume a band of refugees are equated metaphorically with the sea. “The Man of No Account” (1860), an easterner whose failed California experiment left him with the title, is returning home aboard a passenger steamer, which is lost at sea. “By Shore and Sedge” (1885) is the story of Abner McNott, an entrepreneur who converts the Pontiac, a ship abandoned on the California shore by early gold-seekers, into lodging rooms. In “The Right Eve of the Commander” (1870), a mysterious sailor named Peleg Scudder from Salem, Massachusetts, is given safe harbor at a Spanish fort during a storm. By the next morning he has disappeared, leaving the commander of the fort with a seemingly possessed right eye, striking fear in those around him.

A rare story not involving California, “Mr. Midshipman Breezy” (1867) chronicles a young English sailor’s journey across the Atlantic Ocean and through the Caribbean Sea. In a lecture delivered in the Martin Opera House in Albany, New York, in 1872, Harte referred to the early settlers of California as “Argonauts” whom he respected for their adventurous optimism in settling the Pacific coast.