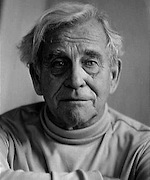 DE HARTOG, JAN (1914-2002). Born in Holland, Jan de Hartog ran off to sea when he was ten years old. Six years later he enrolled in Amsterdam Naval College and became a junior mate in the Dutch oceangoing tugboat service. Escaping to London under the German occupation, he served as war correspondent for the Dutch merchant marine. An early play, Skipper next to God (1947), is a dramatic tale about a religious captain who quells a near mutiny and scuttles his ship to bring 146 Jews onto American soil during the annual Hatteras Cup race in 1938. De Hartog was made an officer of the French Academy in 1953, settled in the United States, and in 1983 was nominated for the Nobel Prize in literature.

De Hartog’s nautical experiences range from working in the Dutch fishing fleet in the North Sea to serving on oceangoing salvage tugs during World War II, and his published works reflect his experiences. His first novel, Captain Jan: A Story of Ocean Tugboats (1947), is a humorous story of a boy’s career in the merchant navy. The Lost Sea (1951) is de Hartog’s story of his coming-of-age as a stowaway on a Dutch fishing vessel. The Distant Shore (1952) presents two short stories. The first, “War,” was originally published as Stella in 1950 and, after being made into the movie The Key (1958), was published in that year with the movie title. It revolves about one particular sailor and his female companion while on his shore leaves, presenting a poignant story of human relationships in the uncertainties of wartime shipping. The second part, “Peace,” portrays the life of the working waterfront and the maritime scene in the coastal Mediterranean after the close of World War II.

A Sailor’s Life (1956) is a collection of very short, reflective vignettes of pre-World War II life at sea by different members of the crew of a vessel identified by their job descriptions and positions. The vignettes comment on the routine of shipboard life, ships and shipping, the sea; it is an assemblage of sailors’ thoughts at sea about the world in which they live, the world they left behind, and the world to which they will be returning. It is a major contribution to our ability to envision life on board merchant vessels in the first half of the twentieth century. The Lost Sea, The Distant Shore, and A Sailor’s Life were published in one volume, The Call of the Sea (1966), for which de Hartog wrote a six-page preface.

The Captain (1967) presents life at sea on a wartime oceangoing salvage tug. Its work was rescuing vessels damaged by German submarines, surface ships, or airplanes or by the heavy winds and seas in the North Atlantic from Nova Scotia to Murmansk, Russia. De Hartog’s Captain Martinus Harinxma emerges as a thoughtful observer of the passing human and inhuman scene. Harinxma’s saga is continued in The Commodore: A Novel of the Sea (1986) and The Centurion (1989) and completed in The Outer Buoy: A Story of the Ultimate Voyage (1994). by James F. Millinger (2000)