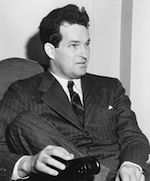 GREEN, PAUL [ELIOT] (1894-1981). A prolific playwright and poet whose literary career spanned several decades and genres, Paul Green is remembered chiefly for his dramatizations of southern folklore and customs and the plight of the African American in particular, in such plays as In Abraham’s Bosom (first perf. 1927; pub. 1927) and The House of Connelly (first perf. 1931; pub. 1931).With American history and folklore among his main thematic concerns, Green wrote The Lost Colony (first perf. 1937; pub. 1937), a panoramic drama commemorating the 350th anniversary of the establishment of Sir Walter Raleigh’s colony on Roanoke Island, intended to be performed outdoors. In this “Symphonic Drama in Two Acts,” Green employs music, pantomime, dance, and scores of actors, singers, and dancers to portray the hardships of the early colonists, their encounters with Native Americans, and their neglect by the British Crown. The ocean, on which the settlers experienced hardships and death, comes to represent the brutality of nature, hope, and the formation of group identity, as the colony is forced, at the play’s end, to flee from invading Spanish troops. This play, which became a popular annual attraction, was commissioned by the North Carolina Historical Commission as a site-specific environmental production and benefited from the assistance of the Federal Theatre Project of the Works Progress Administration.

With The Founders (first perf. 1957; pub. 1957), Green once again turned to American colonial history, this time with a more overtly pageantlike approach. Here he tells the story of the earliest years of the Jamestown settlement and its chief personalities–John Rolfe, Sir Thomas Dale, and Pocahontas–with the land disputes between the colonists and Native Arnericans as its primary conflict. The watery environment of the York River near Jamestown and the Atlantic Ocean functions as a sort of deus ex machina, upon which the fate and well-being of the colonists depend. Above all, the ocean represents the vast social and political distance, primarily between tyranny and freedom, symbolized by the founders’ crossing. Although Green’s biased account of the colonists in their land disputes with the Indians and Pocahontas’ uncritical embrace of colonial ideologies are problematic by contemporary standards, his emphasis on thrilling spectacle and authentic pageantry renders this an exemplary document of environmental, community-based, and site-specific historical drama.