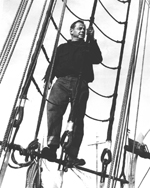 GANN, ERNEST K[ELLOGG]. (1910-1991). Known primarily for his books in the field of aviation literature, Ernest K. Gann wrote about seafaring in Twilight for the Gods (1956) and Song of the Sirens (1968). Twilight for the Gods is an engaging tale of the passage on an overaged barquentine, Cannibal, carrying copra from Suva in the Fiji Islands to Mexico in the 1920s, the “twilight” of the era of sailing cargo vessels. The Cannibal carries people from many walks of life who have been less than “successful,” and Gann reveals much about their characters, especially that of the captain, as the Cannibal begins to sink en route.

While waiting out a gale in a Danish port, Gann reminisces about the seventeen vessels that have been in his life in the Song of the Sirens. His “sirens” range from Liberty, which sank on its first trip out on a lake, to two commercial fishing boats that Gann once owned and operated on the Northwest Pacific coast. The centerpiece of the Song of the Sirens is the Albatross, like the Cannibal a “middle-aged maid of fading beauty” (3), which he owned for four years. Gann takes us on his actual sailing voyage from Holland to San Francisco, then into the South Pacific and back to England.

On both the fictional and the actual vessels, the “principal cargo was dreams” (Song of the Sirens 158). Gann’s skills as a storyteller result in stories of adventure and romance. They are nautically informed and are made particularly interesting by his thoughtful comments and observations about life at sea and its meanings and his obvious love for his vessels. Twilight for the Gods was made into a movie of the same title in 1958 starring Rock Hudson.