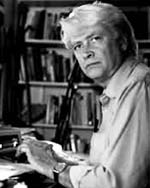 GARDNER, JOHN [CHAMPLIN] (1933-1982). The son of a dairy farmer, John Gardner had no important personal connection with the sea. Indeed, his maritime novella, The King’s Indian (1972, in a volume of the same name), a modern Ancient Mariner story about a Captain Dirge and the whaler Jerusalem seeking the Vanishing Islands, projects a constant desire to return to land or perhaps even to convert the sea into land. Still, the sea figures pervasively in some of Gardner’s works, from metaphors about mental activity in The Wreckage of Agathon (1970), to the fictional police chief Fred Clumly’s reveries about serving on the S.S. Carolina and the thief Walter Boyle’s memories of unloading Great Lakes freight in The Sunlight Dialogues (1973).

The ocean figures most prominently in the narrative poem Jason and Medeia (1973) and in the novel October Light (1977). As Gardner says in his introduction, Jason is roughly based on Apollonios Rhodios’ Argonautica (1546) (with liberal sprinklings from the Odyssey). Gardner carefully researched the construction, planking, binding, tarring, and rigging of the Argo, the ship that Athena sponsors on Jason’s quest for the Golden Fleece. As in tradition, the ship often speaks in Athena’s voice. Gardner also pays great attention to coastal names, real and imagined, from Achaea in the Gulf of Corinth, past Thrace, through the Propontis, the Bosporus, and the Bithynian Sea, to the estuary of Phasis (modern Rion) at the end of the Black Sea in Colchis (modern Mingrelia in Georgian Russia).

October Light takes place in landlocked Bennington, Vermont, where an old woman discovers a “dirty” paperback sea novel that her brother’s grandson has hidden in a pigsty. The narrative of the paperback, which occupies about a third of the novel, chronicles the adventures of two competing twentieth-century drug snlugglers, the captains of the Indomitable and the Militant, who traffic in marijuana between the Pacific coast of Mexico and San Francisco. The tragicomic plot places a would-be suicide from the Golden Gate Bridge as the skipper of the Indomitable. For transacting their marijuana deal, the ships land at Lost Souls’ Rock, which is probably a fictional locale; given details in the ship’s log, however, the landing may be Isla Roca Partida in the Revillagigedo Islands. There a flying saucer may rescue the skippers from a deadly earthquake. by William Crisman (2000)

This entry was posted in G. Bookmark the permalink.