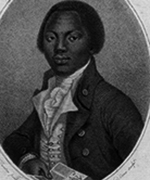 EQUIANO, OLAUDAH (1745-1797). By the time he died at the end of the eighteenth century, mariner, author, and abolitionist Olaudah Equiano had likely become the wealthiest and most famous Black man in the Atlantic world. A widely travelled ex-slave who had sailed extensively on both naval and merchant ships, Equiano also participated in an Arctic voyage of exploration and spent time among the indigenous peoples of Central America.

The details of Equiano’s birth remain contested. His autobiography identifies him as an Igbo man of noble birth, who grew up in West Africa, in today’s Nigeria. The book tells how, kidnapped as a child of eleven, Equiano experienced the infamous “Middle Passage,” sailing under horrific conditions on a slave ship from Africa to the West Indies. Recently discovered documents, however, undermine this version of Equiano’s childhood. Scholars like Vincent Carretta cite Equiano’s baptismal and marriage certificates, his will, and naval records, which give South Carolina as the place he was born into slavery. Other scholars like Paul E. Lovejoy disagree, arguing that errors with some documents, as well as details of Equiano’s life as presented in his book, support his claim to African origins. If historians debate Equiano’s birthplace, however, none dispute the extent of his maritime experiences.

A slave eventually sold to a British sea captain, Equiano served on board naval vessels on which two sailors, Richard Baker and Daniel Queen, helped him adjust to life at sea and encouraged his conversion to Christianity. Equiano served under various captains, and ultimately, Captain Thomas Farmer convinced Equiano’s master to sell the slave his manumission in 1766. When Farmer died at sea, command temporarily fell to Equiano, who navigated the ship to Antigua and then safely to port in Montserrat.

During the Seven Years’ War, Equiano saw action on various warships of the Royal Navy. Serving under Vice-Admiral Boscawen, he participated in General Wolfe’s 1758 attack against the French in Louisbourgh and in 1759 carried powder for gunners during a battle between Boscawen and the French under Le Clue. In 1761 he accompanied Commodore Keppel on the successful siege of Belleisle (Belle Île) and subsequently served under such prestigious leaders as Commodores Stanhope, Dennis, and Lord Howe. After surviving the 1767 shipwreck of a slave ship on which he worked, Equiano set out with Constantine John Phipps (later Lord Mulgrave) and the 18-gun sloop H.M.S. Racehorse on one of the earliest Arctic explorations. A young Horatio Nelson served as midshipman on this 1773 expedition that searched for the Northeast Passage. A year later Equiano, while on a merchant voyage to Smyrna, rescued another free Black sailor from reenslavement. He received help from abolitionist attorney Granville Sharp, who also opposed the impressment of sailors. In 1776, between various merchant voyages, Equiano lived in Central America with the Miskito Indians.

All told, Equiano’s experiences made him one of the most widely traveled men of his day. He wrote about those voyages and his experiences of slavery in his autobiography, whose subscription list included the Prince of Wales and other members of Britain’s social elite. Published in 1789, The Interesting Narrative of the Life of Olaudah Equiano, or Gustavus Vassa, the African (Written by Himself) proved one of the most popular slave narratives, running through nine editions in his lifetime and appearing in posthumous translations into German and Dutch. To promote the book and the  abolition cause, Equiano visited England, Ireland, Scotland, and Wales, reading his work and participating in “the first modern-style author tour in British history,” according to John Bugg.

The Life of Olaudah Equiano, or Gustavus Vassa, the African… (1789)

Kelleter, Frank. “Ethnic self-dramatization and technologies of travel in The Interesting Narrative of the Life of Olaudah Equiano, or Gustavus Vassa, the African, Written by Himself.” Early American Literature, vol. 39, no. 1, Winter 2004, pp. 67-84.

Rutledge Fisher, Rebecka. “The Poetics of Belonging in the Age of Enlightenment: Spiritual Metaphors of Being in Olaudah Equiano’s Interesting Narrative.” Early American Studies, vol. 11, no. 1, winter 2013, pp. 72-97.

Britain’s Black Past, 2016. (click on title to listen to podcast)
Professor Gretchen Gerzina of the University of Massachusetts explores the lives of Black settlers in Britain through her travels across Britain and conversations with historians such as Vincent Carretta and James Walvin.

Shackled by Language: The Representation and Self-Representation of English-Speaking Black Voices in Black Atlantic Writing, 2012
Cecelia Bennett explores the intersection between the English language and the Black voice within Atlantic narratives and how it continues to influence today’s works.