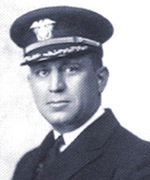 ELLSBERG, EDWARD (1891-1983). Edward Ellsberg was a naval officer, diver, expert in ship salvage, and captivating storyteller. Graduating from the Naval Academy in 1914, Ellsberg served as a naval officer until 1926, when he went into the naval reserve and became chief engineer for Tide Water Oil. Before becoming a civilian, he had helped to salvage the submarine S-51, for which work he won the Distinguished Service Medal and was promoted to commander by special act of Congress. Ellsberg’s first book, On the Bottom (1929), is an account of the raising of this submarine. In late 1927 Ellsberg volunteered his services for the failed rescue attempt on the submarine S-4, an operation he later described in Harper’s (“When the S-4 Went Down,” May 1936, pp. 643-55).

While a civilian engineer, Ellsberg wrote other books on diving; a novel about World War I submarines called Pigboats (1931), which was later made into the movie Hell Below (1933); and a long novel about John Paul Jones, Captain Paul (1942). He also wrote a series of four juvenile books on treasure hunting, beginning with Thirty Fathoms Deep (1930) and ending with Treasure Below (1940).

Ellsberg’s most important book of this period is Hell on Ice (1938), a gripping account of the fortunes of the Jeannette, a 142-foot bark that attempted to sail to the North Pole by way of the Bering Sea and western Arctic Ocean. The Jeannette‘s captain, Lieutenant Commander George Washington DeLong, had conceived the venture under the mistaken belief that the warm Japan current was deflected up the coast of Alaska and would provide closer access to the pole by boat than from the Atlantic. Obtaining civilian backing, he gathered a crew of officers and men from the U.S. Navy and a few civilian scientists and sailed from San Francisco on 8 July 1879. For almost three years, nothing was heard of the vessel. A handful of survivors finally reported that the vessel had been frozen in ice for two years and then sank. Its half-crazed, starved crew had then dragged three small boats across 500 miles of ice floes to Siberia; two-thirds of the remaining men were lost just upon reaching the coast.

Originally moved by curiosity about a monument to the Jeannette on the Naval Academy grounds, a stone cross frosted with marble icicles, Ellsberg did three years of research into diaries and historical records to find the ship’s story, which he narrates as though from the log of the Jeannette‘s chief engineer. Hell on Ice is a novel of beauty and compassion as well as adventure, hardship, and tragedy.

Ellsberg resigned his naval reserve commission in 1940 and volunteered for active service on 7 December 1941. Pearl Harbor had made the navy desperate for salvage expertise, and, though he was over fifty, Ellsberg was ordered to Massawa, Ethiopia, where rested the greatest collection of sunken wrecks in the world. The previous year, the Italians had systematically scuttled some forty Italian and German ships and two invaluable floating steel dry docks, destroying all the machinery in the port. Ellsberg raised the dry docks and several ships. He also got the port operating again, in time to help the British against General Rommel, the “Desert Fox,” in North Africa.

After the war Ellsberg told the story of this experience in Under the Red Sea Sun (1946), which describes well the months of exhausting salvage work in the face of blistering temperatures and a virtual lack of technical and moral support. The sequel, No Banners No Bugles (1949), traces Ellsberg’s second assignment, salvage in the Mediterranean in 1943. The second book is even more dramatic than the first, particularly the episode in which Ellsberg saves a torpedoed British cruiser from sinking despite her captain and crew’s having completely abandoned her. Ellsberg’s tone sometimes borders on the magisterial, but his confidence and vivid, firsthand descriptions are not quite like anything else in sea literature.

This entry was posted in E and tagged 20th Century, Navy/Coast Guard, Nonfiction. Bookmark the permalink.