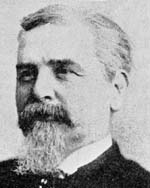 ELLIS, EDWARD SYLVESTER (1840-1916). A prolific, versatile author, Edward Sylvester Ellis was born in Geneva, Ohio, near Lake Erie. While young, he moved to New Jersey, only later to return to the Great Lakes in his writing. Ellis wrote during stints as a schoolmaster, school superintendent, and editor. He became a full-time writer in 1874, publishing hundreds of books under his own name and using numerous pseudonyms. His successful early work, Seth Jones (1860), helped establish the genre of dime novels. His dime-novel Indian tales, all published under the name Colonel H. R. Gordon, included such titles as Jim: A Tale of the Minnesota Massacre (1864), The Hunter’s Escape: A Tale of the Northwest in 1862 (1864), Pontiac: Chief of the Ottawas (1897), and Tecumseh: Chief of the Shawanoes (1898). These generally use the Great Lakes setting merely as a plot expedient, although in Black Partridge, or the Fall of Fort Dearborn (1906) the chain of Lakes is given more poetic treatment. Ellis also wrote school texts, biographies, and histories, such as his popular six-volume History of the United States (1896).

The Hunter’s Escape: A Tale of the Northwest(1862)

Indian Jim: A Tale of the Minnesota Massacre (1864)