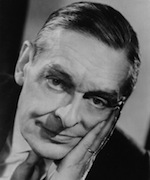 ELIOT, T[HOMAS]. S[TEARNS]. (1888-1965). T. S. Eliot, perhaps the greatest poet of the twentieth century, was born on the banks of the Mississippi River in St. Louis, Missouri. Educated at Harvard, the Sorbonne, and Oxford, he became a British subject in 1927 and received the Nobel Prize in literature in 1948. Though he is best known for his great poem of dryness, The Waste Land (1922), poetry alluding to water spans his entire career. He became an avid sailor in his youth while summering on the Massachusetts coast, and his memories of the Mississippi and of the New England coastline infuse the later poems “Marina” (1930) and “The Dry Salvages” (1941), one of the Four Quartets (1942), his final long poem and crowning poetic achievement.

Eliot’s poetry shifts in tone after his conversion to Anglicanism in 1927. In the earlier poems, specifically The Love Song of J. Alfred Prufrock (1917), The Waste Land, and The Hollow Men (1925), there is either dryness or death by, and dread of, water. In the later poems, water suggests mystery and divinity, where the interaction of river and sea is an image of humanity within eternity, an idea Eliot takes from Herakleitos and applies in The Dry Salvages. Most significantly, Eliot redeems the image of the sea in his later poetry, buying it back from modernist nihilism, and his thoughts also come back to America, the homeland that he had purposely fled.

This entry was posted in E and tagged 19th Century, Coastal Life, Poetry. Bookmark the permalink.