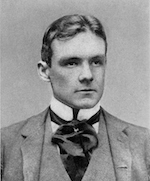 DAVIS, RICHARD HARDING (1864-1916). Born in Philadelphia, Richard Harding Davis was the first child born to the journalist L. Clarke Davis and the fiction writer Rebecca Harding Davis. He soon followed in his parents’ footsteps as a newspaperman and later the author of short stories, novels, and plays. Davis was not content to report only local, regional, or national events, however, and rapidly established himself as a superb war correspondent, traveling by ship to many exotic locales. He sailed to Cuba on the Oliviette in 1886 to cover the insurrection, returning on the same vessel.

In 1895 he published Three Gringos in Venezuela and Central America, which includes an account of his travels by steamer, open boat, and cargo boat. He sailed to England, then on to Greece in 1897 to cover the Greco-Turkish War. The explosion of the U.S.S. Maine in Havana harbor in 1898 brought Davis home from Europe; from Key West he watched American warships head for Cuba. Securing passage on a mail boat, Davis managed to get aboard the flagship New York. His coverage of the Spanish-American War in The Cuban and Porto Rico Campaigns (1898) was very well received.

Several of Davis’ fictional works take place on ships, including the short stories “A Derelict” (1901), set on a press boat during a naval battle, and “On the Fever Ship” (1899), set on a transport converted to a hospital ship. Though these ships serve principally as setting, the transport of “On the Fever Ship” is personified briefly as unsympathetic to the heroic, sickly, human cargo she was not designed to carry. Ships figure prominently in Davis’ plays as well, such as The Dictator, set partly on the Bolivar, a passenger steamer, and The Galloper, whose second act is set on a wharf with ships in the background and several characters ascending and descending the gangways. Both plays were published along with Miss Civilization, in Farces (1906).

The Cuban and Porto Rico Campaigns (1898)

“On the Fever Ship” (1899) within The Exiles and Other Stories