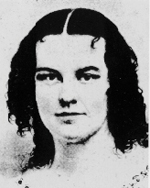 DAVIS, REBECCA HARDING (1830-1910). Although best known for her gritty depiction of factory life in her story “Life in the Iron-Mills” (1861), Rebecca Harding Davis frequently used vivid sea imagery in her writings. Intimately familiar with marshes, sand dunes, shipwreck legends, and the moods of the sea through summers spent vacationing with her family at Point Pleasant, New Jersey, Davis uses indeterminate coastal settings in exploring ambiguities of gender and class. In the story “Out of the Sea” (1865), for instance, urbanite Mary Defourchet travels through the primal seascape of the New Jersey coast, where she observes the quiet mannerisms of its inhabitants. While watching the spectacle of a shipwreck, Mary witnesses a vision of redemption through disaster as the aged Phebe Trull rescues her long-absent son, who happens to be Mary’s fiance. “Earthen Pitchers” (1873-1874), set in Lewes, Delaware, questions how urban and rural characters define artistic and natural aesthetics in relation to a protean coastal environment. The sea, with its rejuvenating characteristics as well as thundering surf, quicksand, and buried wreck victims, serves as a vehicle through which Davis explores social, cultural, and gender constraints and obligations.

In two of her journalistic essays, “The House on the Beach” (1876) and “Life-Saving Stations” (1876), Davis narrates the adventures of tourists as they explore a section of New Jersey coast. “The House on the Beach” documents the efforts to reduce shipwreck and storm damage through the systematic study of weather patterns by the Signal Service. Likewise, in “Life-Saving Stations,” Davis blends melodramatic action with descriptions of life-saving equipment and the efficiency of lifesaving crews to respond to shipwreck. By linking the specific locality to an analysis of heroism and technology, tempered by accounts of morally corrupt wrecking endeavors, Davis not only replaces the highly romanticized view of heroic lifesaving with a more balanced realism but also elevates local geography to national prominence. Other Davis writings in which the sea figures prominently include “Natasqua” (1870-1871), “A Faded Leaf of History” (1873), and “On the Jersey Coast” (1900).

This entry was posted in D and tagged 19th Century, Coastal Life, Fiction. Bookmark the permalink.