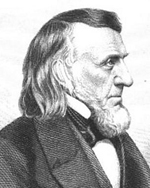 DANA, RICHARD HENRY, SR. (1787-1879). Richard Henry Dana Sr. was born into a prominent Cambridge, Massachusetts, family. He was educated at Harvard, leaving without a degree in 1807. He studied law and passed the bar in 1811 but showed little interest in practicing law. In 1814 he collaborated with others to establish the North American Review, where he first expressed what would become a lifelong devotion to the romantic ideology of William Wordsworth and Samuel Taylor Coleridge.

The author of numerous essays and four brief novels, Dana wrote about the sea only in his poetry. Aside from two brief lyrical poems, his chief contribution is “The Buccaneer” (1827), a narrative poem of more than 700 lines that remained popular throughout the 1830s. Strongly influenced in its themes and imagery by Coleridge’s “Rime of the Ancient Mariner” (1798), the poem details the retribution exacted on a murderous pirate, Matthew Lee, haunted and finally ridden to his death in the sea by the spirit of his victim’s steed.

Dana spent summers in his later years at his seaside home in Manchester, on the south side of Cape Ann. He was the father of Richard Henry Dana Jr., author of Two Years before the Mast (1840).

This entry was posted in D and tagged 18th Century, 19th Century, Poetry. Bookmark the permalink.