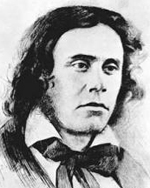 DANA, RICHARD HENRY, JR. (1815-1882). Son of a genteel poet and member of a prominent Boston family, Richard Henry Dana Jr. gained literary fame by turning his back on his Brahmin upbringing, sailing aboard a merchant vessel, and subsequently describing the life of a common sailor in Two Years before the Mast (1840). While this departure from class and culture was only temporary, a “parenthesis,” as he called it, Dana’s experience as a nineteen-year-old sailor served as a continuing touchstone of memory throughout a professional career marked by both moderate success and frustrated ambition.

Dana’s father, Richard Henry Dana Sr., was a prominent New England poet who helped found the North American Review and pioneer literary romanticism in America. Against a background of rarified intellectual discussion and declining family fortune, young Dana left Harvard University and took to sea. He secured a berth aboard the hide carrier Pilgrim and departed Boston on 14 August 1834, for a trip around Cape Horn to California. Anchoring in Santa Barbara the following January, Dana spent the next year and a half collecting and curing hides up and down the coast of California. He returned to Boston aboard the Alert on 22 September 1836, and promptly reentered Harvard, eventually graduating with his original class.

He wrote Two Years before the Mast while in law school and allowed his father and the poet William Cullen Bryant to negotiate a contract with Harpers for a flat rate of $250 rather than one that would have given him a percentage of the sales. Published in 1840, Two Years was immediately popular, acclaimed by Bryant, Ralph Waldo Emerson, and others for the truth it told about the life of the common sailor. Framed by the scenic rendering of the voyages out and back, the book also attains a symbolic coherence as the story of a young man’s education at sea. Two Years helped turn the course of American sea literature away from the Byronic romanticism made popular by James Fenimore Cooper and toward realistic, first-hand accounts told from the point of view of the sailor. It had a particularly lasting influence on Herman Melville who called Dana his “sea brother” in an 1849 letter.

Perhaps the most powerful scene in Two Years is a description of a flogging, after which the young narrator vows to help redress the grievances suffered unjustly by common sailors. Upon his return to Boston, Dana kept his promise by representing numerous sailors in claims against captains and shipping companies. In 1841 he wrote a manual, The Seaman’s Friend (kept in print throughout the century and reprinted in 1979 and 1997), to explain nautical vocabulary and procedures at sea. A passionate and committed lawyer, Dana also championed the rights of fugitive slaves. He was involved in a number of famous cases in Boston, including the “Rescue Trials” of 1851 and the trial of Anthony Burns in 1854. For his efforts, he was at one point knocked unconscious by a street thug and boycotted by supporters of slavery. In 1876 Dana was nominated by President Grant to become ambassador to England, a post that would have capped his career in admirable fashion, but his candidacy was unsuccessful. He had hoped that President Hayes might appoint him to a federal post, but nothing came of this, either, and eventually Dana and his wife retired to Europe. Dana died in Rome.

In a life that Dana himself characterized as one of repeated disappointments, he saw the irony that his “boy’s book” would outlast any of his other achievements. Following periods of stress and overwork, Dana often took enforced vacations; these intervals of rest and physical exercise would bring back the memory of his two-year parenthesis. In 1869 Dana appended a “Twenty Four Years Later” chapter toTwo Years after he revisited California, and this along with his short book To Cuba and Back (1859) demonstrate that Dana retained his eye for scenic maritime description throughout his life.