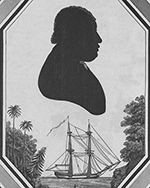 CUFFE, PAUL (1759-1817). Seaman, captain, shipowner, businessman, author, and African colonizer, Paul Cuffe was born 17 January 1759, on Cuttyhunk Island, Massachusetts, the seventh child of his African-born father and Ruth Slocum, a Wampanoag Indian. Cuffe went to the sea in the 1770s as an ordinary seaman, first aboard a whaler and then a West Indies trader. Captured by the British in 1776 or 1777 aboard another ship, perhaps the Charming Polly, Cuffe was soon released. He shipped out on several more voyages before 1779, when he and a brother built a small boat that they manned for commercial activities in Narragansett Bay and Long Island Sound and possibly used for running the British blockade as well. Beginning with this open boat, Cuffe invested his profits to build ever-larger vessels, ending with the 162-ton brig Hero and the 268-ton sloop Alpha.

Commonly sailing with an all-black crew, Cuffe traded along the Atlantic coast and in the West Indies. To encourage trade with Africa, Cuffe sailed the 109-ton brig Traveller for Sierra Leone in 1810, a voyage he recounted in his Brief Account of the Settlement and Present Situation of the Colony of Sierra Leone in Africa (1812). Although this journal provides scant detail, it is valuable as sea literature, for it describes such matters as sailing conditions, ship provisions, and the London docks. To encourage commercial alternatives to the slave trade, Cuffe sailed from Sierra Leone to Liverpool in 1811 with a cargo produced by free African labor. A promoter of African commerce on this first voyage to Sierra Leone, Cuffe next sailed there as a supporter of African colonization. In 1815 he pioneered black-initiated emigration from the United States in his Back to Africa movement, transporting thirty-eight passengers aboard the brig Traveller.

Paul Cuffe founded a dynasty of African American captains, including his sons, sons-in-law, nephews, and grandsons. His daughters inherited shares in the Traveller. His son, Paul Cuffe Jr., documented his own life at sea in the Narrative of the Life and Adventures of Paul Cuffee [sic], a Pequot Indian: During Thirty Years Spent at Sea, and in Travelling in Foreign Lands (1839).

Narrative of the Life and Adventures of Paul Cuffee [Jr.] (1839)