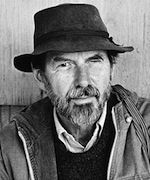 CREELEY, ROBERT [WHITE] (1926-2005). Robert Creeley’s most sustained and important piece of sea writing is his 1963 novel The Island. Although his work only infrequently focuses on the sea or even uses it as background, the center section of the poem “Here” (1969) is a crafted and compressed articulation of some central ideas in The Island. This novel, somewhat autobiographical, is set in Banalbufar, Mallorca, Spain, where the author lived for a short period in the early 1950s. John, the protagonist, and his spouse, Joan, are psychologically alienated, as are the lonely people with whom they come in contact. The island itself is fraught with significance: most of the visitors are themselves islands, struggling to alter their conditions or at least to come to terms with them. Although he is perhaps incapable of human touch, John yearns for it and yet fears it, as does Joan. As divorced from humanity as her husband is, Joan has an affair with Rene, a French Ishmael, and during that brief interlude, a bid for connection, all three watch, detached and unemotional, as another visitor almost drowns; only at the last moment do they save him from being battered to death.

One passage employs the healing qualities of water, alluding to Mallorca’s involvement in the whaling industry, in a reference resonating with the suggestiveness of Herman Melville’s Moby-Dick (1851), the book so central to the thought and artistry of Creeley’s friend and Black Mountain colleague Charles Olson. The shore is the threshold to the renewing sea, but those who even contemplate reaching it or for it are precluded from doing so by the stasis of existential suspension. Appalled by the virtual murder of sea creatures by scuba-diving visitors who “invade” the sea near the end of the story, John and Joan buy and repair a boat in order to reach the healing waters. The tale ends, however, with the prospect of further isolation. Creeley is known chiefly as a poet of the short lyric. In his Collected Poems (1982) he uses the sea’s surging tides and its fluid, formless condition to depict strong states of feeling that never seem to be adequately communicated. See, for example, “The Surf,” “The Sea,” “An Obscene Poem,” “The Innocence,” “The,” and “Sea.” Although the sea is often associated with creativity, the circumscribed and ordinary nature of the seashore scene in “Mazatlan: The Sea” fails to provide inspiration. by Donald Yannella (2000)

This entry was posted in C and tagged 20th Century, Fiction, Poetry. Bookmark the permalink.