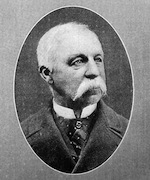 [CODMAN, JOHN], “CAPTAIN RINGBOLT” (1814-1900). John Codman, a well-traveled sea captain and writer, was born in Dorchester, Massachusetts, in 1814. A pastor’s son, he enjoyed listening to lengthy theological discussions with visiting clergymen, but he realized that, like his maternal grandfather, the sea was his true calling. After two years at Amherst College (1832-1834), Codman put to sea on a clipper ship, the first of many voyages for him. During his long career he traveled to China and the East Indies, commanded the troop ship William Penn during the Crimean War, was the captain of the supply ship Quaker City in the Civil War, and ran coastal traders in Brazil.

Drawing on his vast experience at sea, Codman wrote Sailors’ Lives and Sailors’ Yarns in 1847, a work that was reviewed by Herman Melville in the first issue of the Literary World (1847). In this context his persona became one “Captain Ringbolt,” who waxes eloquent with opinions on life at sea, ranging from advice to passengers and types of construction, to the concerns of captains and the problems of sailors.

After the Civil War Codman resumed his writing, publishing sea-related works such as Ten Months in Brazil (1867) and An American Transport in the Crimean War (1896). Codman then became an Idaho ranch owner, writing about his experiences in the American West in The Round Trip (1879) and Winter Sketches from the Saddle (1888). An activist as well as a storyteller, Codman published numerous pamphlets that favored free ships and materials for shipbuilders and opposed subsidies for the merchant marine. Codman was married to Anna G. Day of New York, who accompanied him on many of his journeys. He died at his daughter’s home in Boston. by Lisa Franchetti (2000)

An American Transport in the Crimean War (1896)

The Round Trip by Way of Panama Through California… (1879)

This entry was posted in C and tagged 19th Century, Nonfiction. Bookmark the permalink.