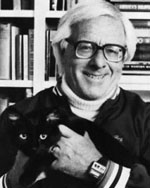 BRADBURY, RAY [DOUGLAS] (1920-2012). Ray Bradbury, prolific author of twenty story collections and eight novels evolving out of more than 340 published short stories, was born in Waukegan, Illinois. He has lived in Los Angeles since 1934. His work as a writer of fantasy, science fiction, horror, mystery, and juvenile fiction spans nearly six decades and includes The Martian Chronicles (1950; film 2000), The Illustrated Man (1951; film 1969), Fahrenheit 451 (1953; film 1966), Dandelion Wine (1957; film 1997), and Something Wicked This Way Comes (1962; film 1983). His childhood on Lake Michigan and his many years on the Pacific coast have had a long-abiding influence on his work. Throughout his career, Bradbury has drawn on the sea as a significant source for his fantasies, and this creative focus has resulted in a body of sea literature that includes some of his best stories as well as his most famous treatment of the sea, the screenplay for John Huston’s film Moby Dick (1956).

In 1944, just two years after the sale of his first story, Bradbury published “The Lake,” a tale of a young man who returns to the shore where his childhood love was taken by the water, only to find that the lake has returned her body (and their castle of sand) as if time had never passed. It is widely regarded as Bradbury’s breakthrough into mature fiction. “The Beast from 20,000 Fathoms” (1951; reprinted as “The Fog Horn”) describes the last of the leviathans, a creature drawn to the beacon and fog horn of a California lighthouse in search of companionship; Bradbury wrote the screenplay for the film adaptation. Other sea tales of merit include “The Women” (1948), “In a Season of Calm Weather” (1957; reprinted as “Picasso Summer”), and “Forever Voyage” (1960; reprinted as “And the Sailor, Home from the Sea”). Bradbury’s water reveries can also become dark tales. In Death Is a Lonely Business (1985), Bradbury invents an underwater killer who tracks victims through the ocean surf and abandoned canals of Venice, California.

During the fall and winter of 1953-1954, Bradbury joined John Huston and his preproduction crew in Ireland to write the Moby Dick screenplay. He was able to tap into Herman Melville’s biblical and Shakespearean roots to develop a treatment that was faithful to the power of language (if not to the plot) of the original work. For Bradbury, Ahab’s gold doubloon and all that it implies about power and control become the central metaphor, diminishing Melville’s philosophical framework and shifting the film to an action-adventure structure. Although dual credit appears on-screen, the writing is almost entirely Bradbury’s. His tempestuous working relationship with Huston provides the plot for his novel Green Shadows, White Whale (1992). He would later go on to write a play, Leviathan 99, transplanting the Moby Dick myth into science fiction; the play became a libretto to an opera of the same name.

“The Ardent Blasphemers,” Bradbury’s introduction to the 1962 Bantam edition of Twenty Thousand Leagues under the Sea, develops significant comparisons between Jules Verne’s Nemo and Melville’s Ahab; even more important, it includes his major critical statements on literature of the sea.