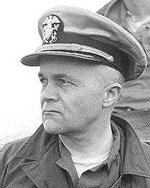 BEACH, EDWARD LATIMER [JR] (1918-2002). As his father had done, Edward L. Beach [Jr.] spent a career as a naval officer and wrote many books on naval topics. Three of these are excellent novels about submarines.

Beach graduated from the U.S. Naval Academy and then entered submarine school in New London, Connecticut. He spent most of World War II conducting war patrols against Japan. Moved by the loss of the Trigger (in which he had served for over two years, the last year as executive officer), Beach wrote some recollections for the families of that vessel’s crew members and eventually stiched these stories and other true-life accounts of submarine duty into his popular Submarine! (1952).

Later, while serving as naval aide to President Eisenhower, Beach drafted a novel about the submarine war against Japan, Run Silent, Run Deep (1955). Based on Beach’s own experience, this novel accurately portrays the technical environment of a World War II submarine and various tactical challenges of submarine duty. It also believably presents the difficulties of a skipper with a subordinate and the submarine’s battles with a brilliant Japanese antisubmarine captain. In 1972, Beach published a sequel, Dust on the Sea, which narrates additional gripping accounts of attacks on Japanese shipping and the challenge of working under an older commodore plagued with mounting mental problems.

Beach also served in, and wrote about, the nuclear navy. In 1960, he captained the Triton in the first underwater circumnavigation of the world, about which he wrote the comparatively prosaic Around the World Submerged (1962). In Cold Is the Sea (1978), Beach’s protagonist undergoes nuclear training and commands a nuclear submarine.

Beach retired as a captain in 1966, then wrote naval history and other books. A recent title is Scapegoats (1995), in which he argues that Admiral Kimmel and General Short were wrongly blamed for being caught by surprise at Pearl Harbor. by Robert Shenk (2000)

This entry was posted in B and tagged 20th Century, First-person narrative, Navy/Coast Guard, Nonfiction, War. Bookmark the permalink.