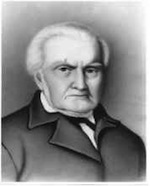 AMES, NATHANIEL (1805-1835). Son of the Federalist statesman Fisher Ames and grandson of a famous colonial almanac publisher, Nathaniel Ames was a blueblood who went to sea and later wrote about it. In this way he served as a literary forerunner of Richard Henry Dana Jr., Herman Melville and others. Like Dana, Ames went from Harvard University to the forecastle; he wrote humorously of how he preferred the “seminary” of a man-of-war to Harvard and how his status as a self-sufficient able seaman was superior to the occupation of authorship. As had Melville in his early novels, Ames combined a genteel, picaresque style with trenchant analyses of foreign missionaries and the inhumane treatment of sailors. He is best known for his nonfiction A Mariner’s Sketches (1830) and Nautical Reminiscences (1832), which recount his experiences in naval and merchant vessels across the globe. Written in a casual, almost offhand manner but with an eye toward startling and realistic detail, these works were among the first to depict the everyday rhythms of a sailor’s existence, its tedium, and its danger. Ames notes in passing, for instance, how a man swimming between vessels is consumed by sharks. His descriptions of landscape and harbor often attain a pictorial eloquence. Impatient with romantic renderings of sea life, Ames was a particularly bitter critic of James Fenimore Cooper’s early sea novels. In A Mariner’s Sketches he claims to have read Cooper’s The Pilot (1823) out loud to the crew of a naval vessel and records their disgust with it. In Nautical Reminiscences, he ridicules the “nonsensical gibberish” spoken by Cooper’s sailors but claims nothing better can be expected from an author who “came in at the cabin windows” (25).

Ames wrote fictional tales of the sea as well, collected in An Old Sailor’s Yarns (1835); many of these are concerned with the love of a sailor for a beautiful woman. Genteel and whimsical, they are very much in the tradition of Washington Irving’s Sketch-Book. In the novella-length Morton, Ames pairs the first mate of an American whaler with the niece of a Spanish governor. In this story of love, battle, imprisonment, and disguise, romantic stratagems are wittily compared to tactics at sea. Together with William Leggett, Ames helped build a tradition of popular, sentimental sea tales that found their way into East Coast literary’ magazines during the 1830s.

Ames’ reputation, however, rests upon his autobiographical writings, especially A Mariner’s Sketches, which provided fellow sailor-authors with a model for conveying the unvarnished realities of sea life. Dana mentions this book on the first page of Two Years before the Mast (1840) as the only previous work in which nautical life is presented from a sailor’s point of view. A Mariner’s Sketches also served as a sourcebook for Melville as he wrote his novel White-Jacket (1850). Melville borrowed a number of details from Ames, most importantly a description of a fall overboard that serves as the climax of White-Jacket. Ames’ work helped to initiate a major shift in American sea literature from Cooper’s romantic novels, to more factual accounts told from the point of view of the common sailor.