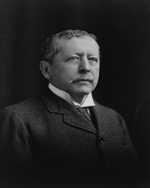 ALDRICH, THOMAS BAILEY (1836-1907). Thomas Bailey Aldrich, known chiefly as the author of The Story of a Bad Boy (1869), edited Every Saturday (1866-1874) and The Atlantic Monthly (1881-1890) and also wrote poems, short stories, and five novels. Born in Portsmouth, New Hampshire, Aldrich lived for brief periods in the seaports of New York and New Orleans, finally settling in Boston. The sea was important to Aldrich and recurs as a minor topic in some of his writings. In her book Crowding Memories (1920), his wife describes him as a “fair-weather sailor” (65) and recounts how he was seasick for eleven days on his first ocean crossing in 1875.

The Story of a Bad Boy is an account of Aldrich’s youth in Portsmouth, called Rivermouth in the novel. He recounts his seasickness when sailing from New Orleans to Rivermouth and in a later chapter, “The Cruise of the Dolphin,” narrates how he and three friends row to Sandpeep Island, the last island in the Piscataqua River before the open sea. After hours of exploring and playing, they send Binny Wallace back to the boat for food, and he is accidentally set adrift without oars in the midst of an approaching squall. Townspeople later find his drowned body.

Aldrich’s strong affection for the sea is glimpsed in his poem “Sea Longings” (1896), where he acknowledges that the first sounds he heard were from the sea and that inland “life languishes.” He wrote about twenty sea poems in all, which fall into three categories: those celebrating his natural ties to the sea (“Piscataqua River” [1861], “In Youth, beside the Lonely Sea” [1896]), those that use the sea as the start for musings not necessarily about the sea (“On Lynne Terrace” [1896]), and miscellaneous poems dealing with some sea event (“Seadrift” [1863], “Lost at Sea” [1896], “Alec Yeaton’s Son” [1896]).