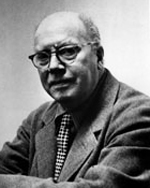 [AIKEN, CONRAD POTTER], “SAMUEL JEAKE JR.” (1889-1973). A friend and contemporary of T. S. Eliot, Conrad Aiken divided his time between England and the United States before settling in Massachusetts in 1947. He used the pen name “Samuel Jeake Jr.” during 1934-1936 as the London correspondent for the New Yorker, although he never published a book under that name; the original Samuel Jeake was a seventeenth-century astrologer.

Aiken’s poems, novels, short stories, plays, and nonfiction employ nautical imagery as well as sea settings, often reflecting biographical and psychological concerns. “Landscape West of Eden” (1934) is a poetic sea voyage in a dream-boat with Adam and Eve; the narrative voice (and humankind) moves toward death. Blue Voyage (1927) is a novel whose main character, William Demarest (“de mare est” meaning “he is from the sea”), is on a sea voyage, hoping to discover his true identity. Implicit in the story is Aiken’s own horrific childhood, dominated by his father’s murder of his mother and his father’s subsequent suicide. Demarest’s “identity” has been forged by Aiken’s trauma, affecting his relations with women and shaping his sense of self. He returns to his bunk each day, recording its events and contemplating the next. His “night-sea journey” to Europe to reach Cynthia, a former lover, is mythically aborted when she turns up as a passenger, engaged to be married. A phantasmagoria, enhanced by the ship setting, pervades the novel and turns the mother/lover loss into nightmare as the sea tosses the ship about.

This same Demarest is the “D” of “Ushant: An Essay” (1952); Ushant is a dragon-shaped rock on the French side of the English Channel, a point of embarkation from Europe. The essay provides a moment in his ship bunk for D to hope for escape over that same sea from evils connoted by the dragon shape of “You shan’t.”

“Mr. Arcularis,” published as a short story in 1934, was produced as a play titled Fear No More in London in 1946 and in Washington, D.C. in 1951. It was later published as Mr. Arcularis: A Play (1957). Again the oedipal theme of Blue Voyage–love/hate of father, loss of mother/lover– dominates the way that the sea, for Arcularis, rolls with highs and lows, calms and tempests. Arcularis’ “throbbing” is the “throbbing” of the ship (himself) over the sea of life to try to reach finally and safely his father’s home (both psychologically his father and metaphorically God). His name indicates the set of little boxes that confine him emotionally and psychologically and also the ship’s alleged destination, Arcturus, the star in Bootes that guards the constellation Ursa Major and signifies tempestuous weather and rough seas.

This entry was posted in A and tagged 20th Century, Fiction, Nonfiction, Plays, Poetry, Short Story. Bookmark the permalink.