The City of (Fraudulent) Light

UncategorizedNovember 19, 2016Comments Off on The City of (Fraudulent) Light

Amélie, released in 2001, is a French film directed by Jean-Pierre Jeunet that was met with great international success and remains “the highest-grossing French-language film in the United States” (Gibbs). Despite its large popularity and critical acclaim, the movie has been condemned for its “lack of realism” (Ezra 86). Rosemary Wakeman likewise argues that Jeunet crafted qualities of a “beloved, intimate, old-fashioned world” that are not found “in any of the city’s contemporary sites”. Analyses into how this ideal world is formed focus primarily on the motion picture’s digital manipulations (Ezra; Kelly). Although the effects from such manipulations contribute heavily to the film’s fantastical quality, the portrayal of a traditional France and the interactions among minor characters are large players in the film’s perception as amiable and largely better than our own.

Digital-enhancement is the more frequently attributed foundation of Amélie’s overall impression. Producers primarily used digital-enhancement to create a bluer sky and dramatize the entirety of the film. They removed visible graffiti from many of the sets and permeated the film with a continuous golden glow that “imbues even the edgier locales and situations with a tinge of nostalgia” (Ezra 87). These revisions are even more highly criticized for the fact of the film’s setting in Montmartre, where in reality its “[suburban] housing projects … lack [any] kind of ‘conviviality and rootedness’” (Wakeman). The “crime, social exclusion, and institutional racism” present in Paris, and even more so in this locale, is “glossed over” by the edits (Ezra 87). The digital modifications are clearly meant to romanticize Paris, and these revisions exist to produce an experience that entertains and makes its viewers happy. One of the greatest ways to accomplish this goal, and arguably the ultimate mode of entertainment, is through depiction of utopia, markedly so in this film. However, creating a more visually pleasant Paris is not the only contributing factor to its formation; there are reconciliations of society’s shortcomings in many other aspects of the film that together create its renowned “feel-good” liberation (Wakeman). 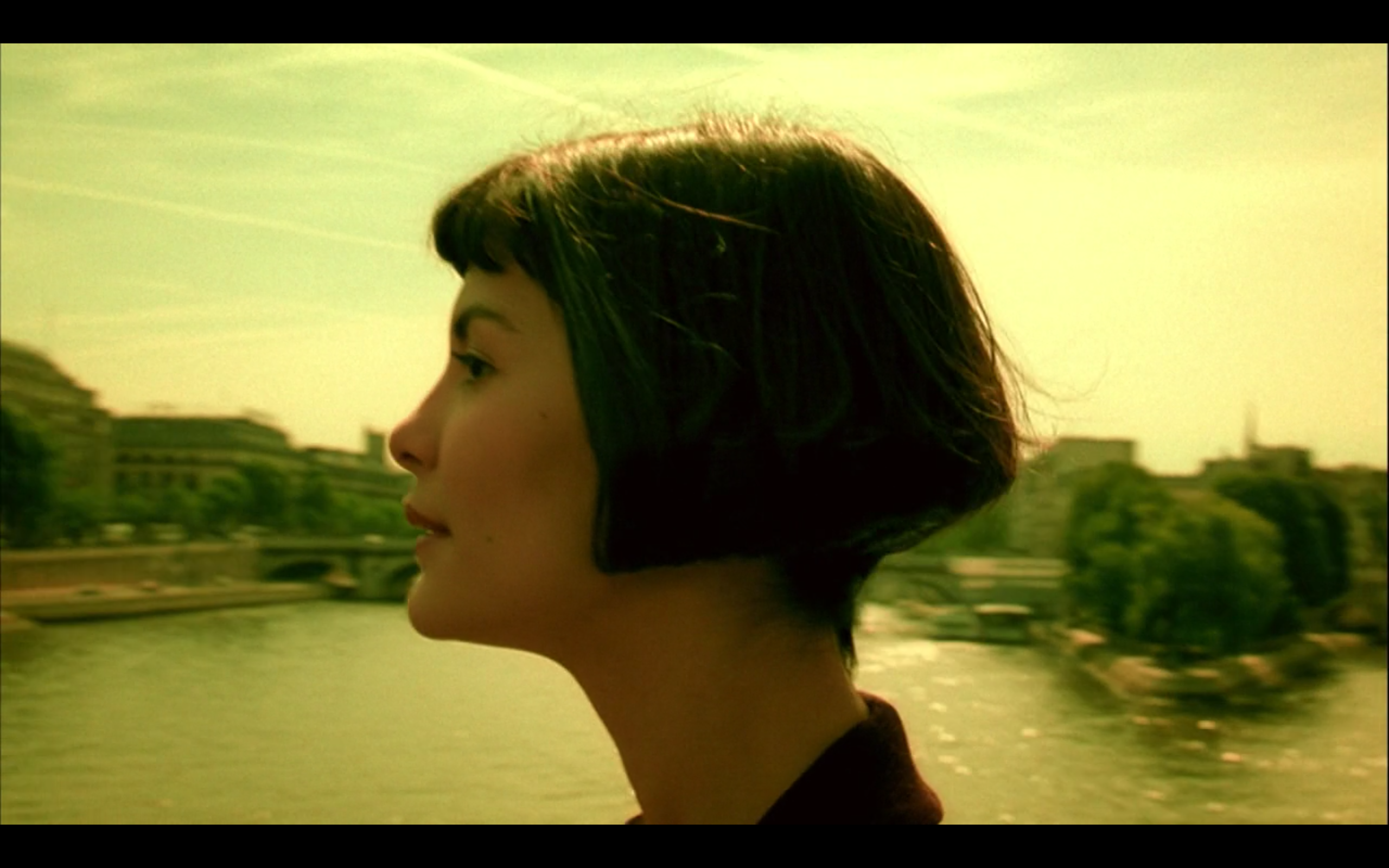 Amélie walks along the Seine after finding joy in helping others.

First, Amélie, the shy, whimsical, and ingenious protagonist of the film, actively decides to become a force of good in others’ lives (15:52; 35:08). In doing so, Amélie necessitates a focus on the formation of community, and the outcomes and experiences of minor characters become immensely important to the success of the protagonist’s quest. One major point of this is that most of, if not all, the people Amélie chooses to help are initially isolated in some way. Georgette, a nervous hypochondriac coworker of Amélie’s, and Joseph, a recently cynical-of-women customer at the diner, experience a short-lived romantic relationship together. It is notably initiated by the transparent and open attitudes they display for each other, and Amélie’s fabrication of those attitudes nonetheless allows for the formation of an honest relationship. 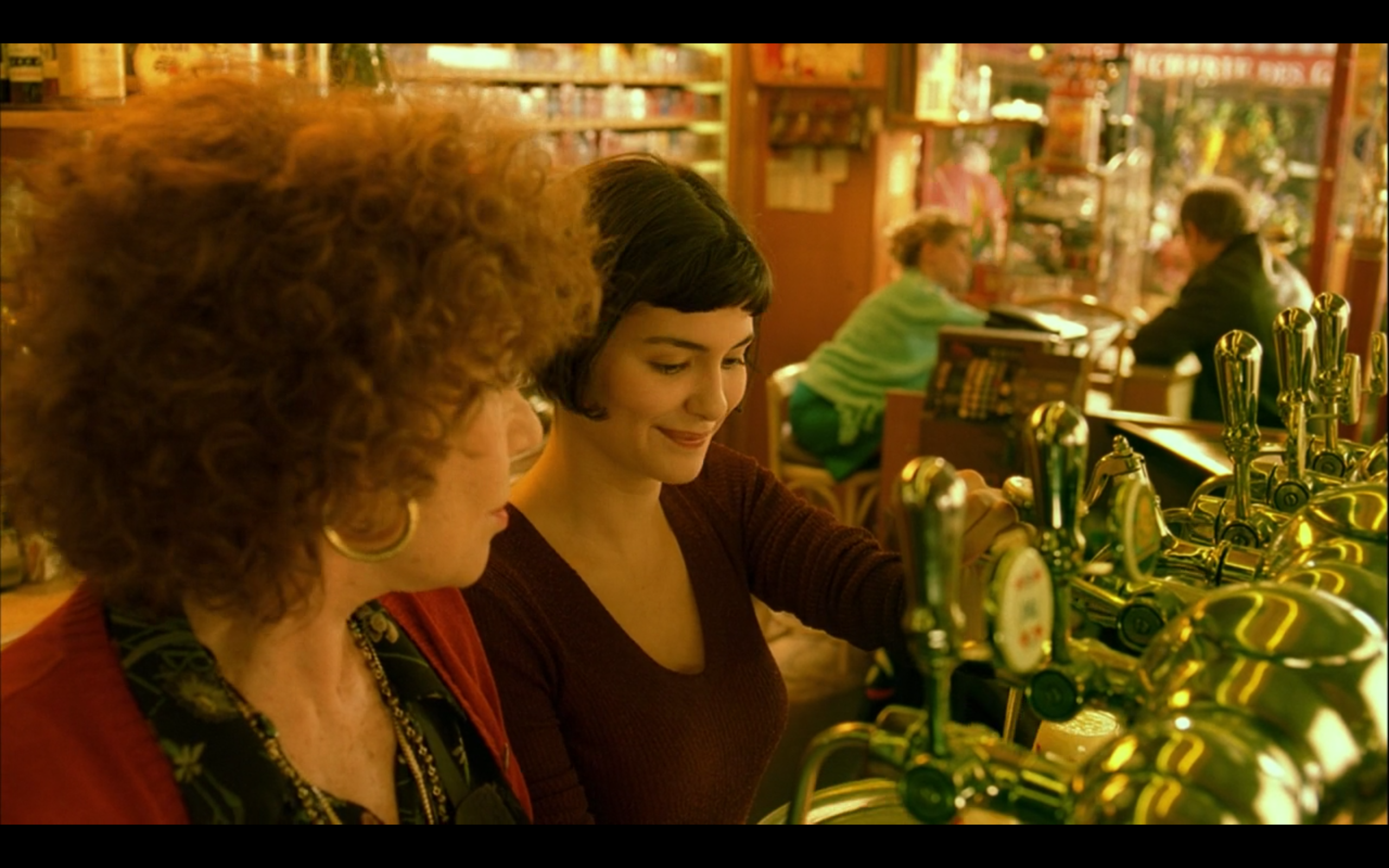 (left to right) Suzanne, Amélie, Georgette, and Joseph at the diner, after Amélie has told Georgette and Joseph they have feelings for each other.

Although the two characters do not continue this relationship past their first sexual relation, they are incorporated into the social world around them in a way they hadn’t been at the start of the movie – a lady notices Georgette and calls, “It’s ages since I saw you, you look good!” (52:13), and Joseph’s overriding characterization as the “jealous ex-lover” is offset by joy and real discussion with others (1:18:25). Yet, these are merely two examples – the film presents improvements in the social lives of multiple characters, with profound effect on each of them, and the community, no matter their temporality.

Moreover, it is evident that the film “feels good” in part because of the sheer abundance and simultaneous lack of poverty it portrays. Just in terms of physical profusion, there are countless scenes in which the sets are riddled with “stuff”. For instance: the wall behind Georgette’s counter in the diner is lined with dozens of cigarettes brands; both Amélie’s and Madame Wallace’s rooms are covered in knick-knacks; Nino collects probably hundreds of photos in a large book; and there remain many other instances of plain and simple copiousness. 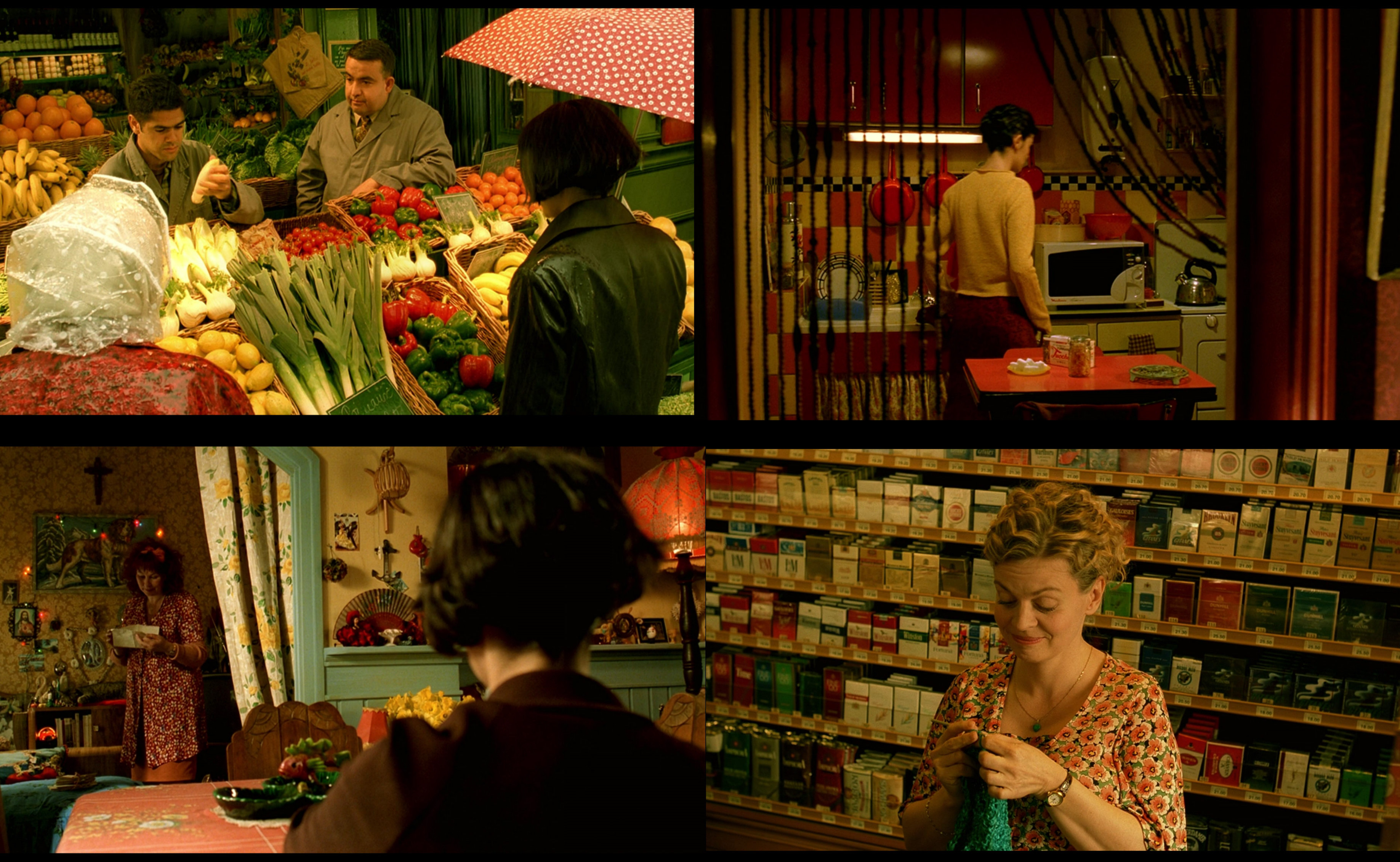 This kind of visual gratification is coupled to the film’s likely deliberate elimination of poverty, or satirizing of it. For example, before going to see her father, Amélie is walking on a train platform and attempts to offer a presumably homeless man some money. He refuses the money and tells her “Non merci ma petite dame, je travailles jamais dimanche,” which translates to “No thanks, madam. I never work on Sundays” (11:25). His refusal, and his claim of having days off, is a complete surprise that cinematic technique communicates as a light moment of blissful happiness, by the inclusion of airy French street-music and smiles from both characters. Even the poor man on the street is happy in this film. Soon after, when Amélie is again going to visit her father, another presumably poor man, in this case now a blind man, is on the subway platform playing Fréhel’s “Si tu n’étais pas là” on a mobile record player. The song is classically French, reminiscent of the early 1900’s “French Chanson”, and its use in conjunction with the poor, blind man has similar effect as the previous example – his status as impoverished is diminished in importance, and he’s just a man listening to music like all the others in the station. 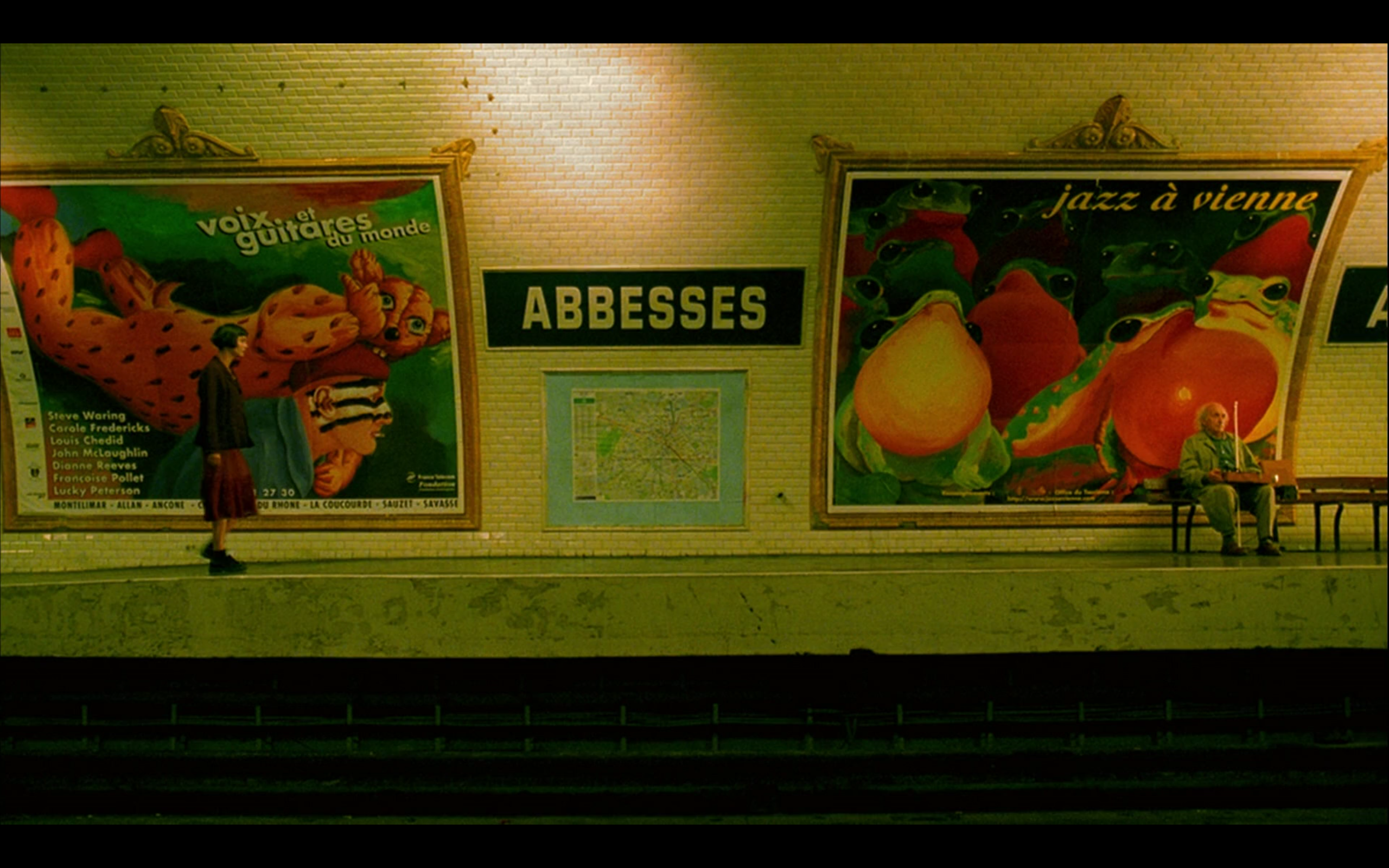 Amélie approaches the poor, blind man on the subway platform.

The desperately poor are made equal to those who live comfortably by being portrayed as similarly comfortable with obviously less-favorable situations, so that we, as viewers, can find pleasure in knowing that they are just as happy as anyone else. 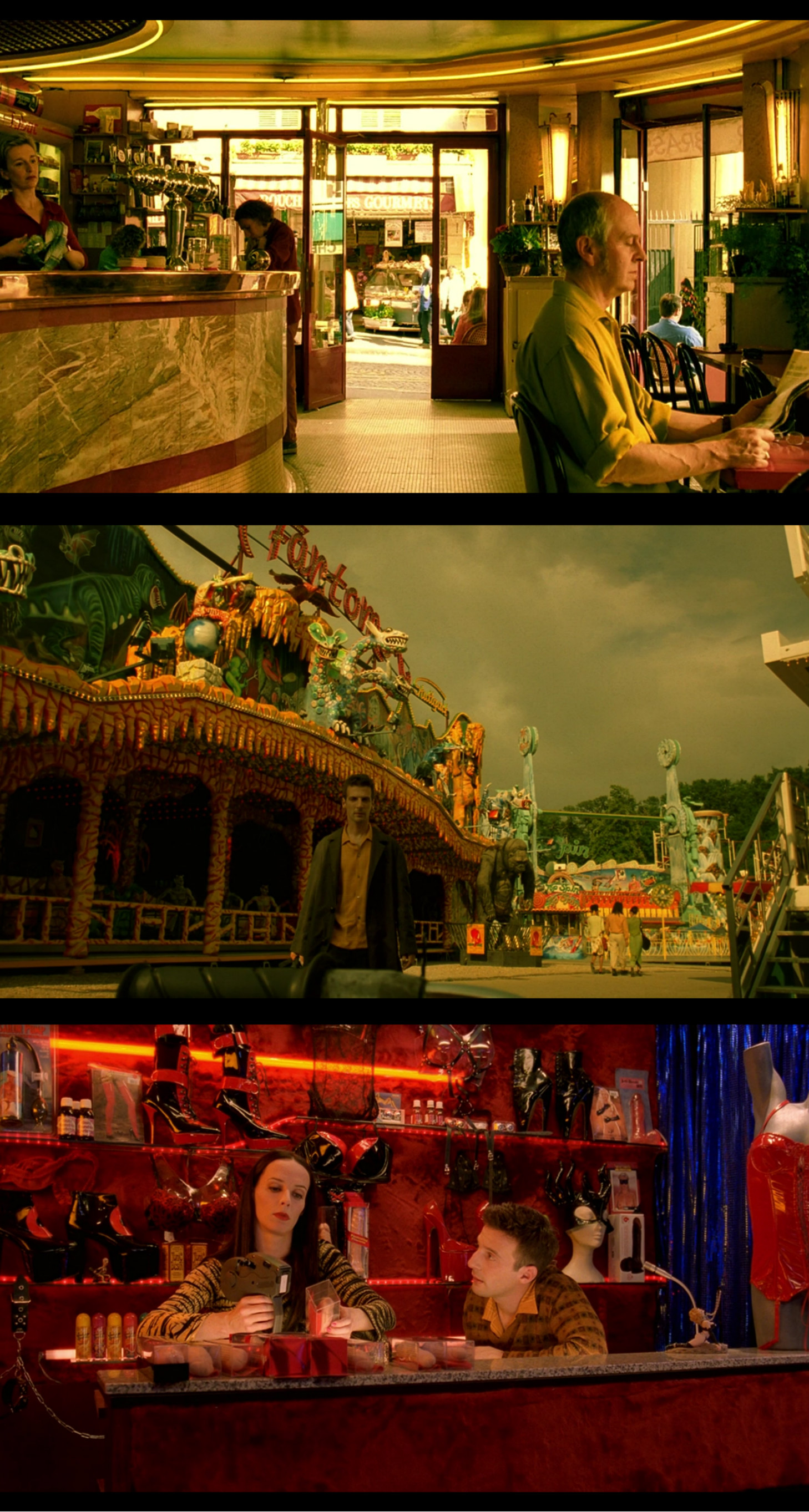 Furthermore, the plot and characters possess continuously great energy and intensity, qualities our regular day-to-day lives often lack. Much of the film takes place in Amélie’s workplace, where she logically spends most of her day; the diner is in no way dull however, and neither are the workplaces of Nino, Amélie’s romantic interest to whom the film also devotes large amounts of screen time. The intensity of the location derives largely from it being the place where the relationships between Georgette and Joseph as well as Amélie and Nino develop, and from it being where a number of Amélie’s creative schemes unfold. By the same token, her first meeting with Nino nearly occurs at his part-time workplace, the Porn Palace, and the excitement and romance of this near-meeting is captured in charming quality that’s imbued to even that locale. She then goes to the Funfair, Nino’s second workplace, to continue what would best be described as a game of cat-and-mouse. Here again, Amélie makes play the central theme of a space where most people would uphold a high level of wearisome uniformity. Instead of doing so, Amélie sends Nino on a scavenger hunt with arrows drawn in blue chalk and made of colorful sprinkles (1:13:15). Alongside these scenes of playfulness, there are similarly utopian scenes of excitement, via rapid progression. One such scene occurs when Amélie takes the blind man we had seen previously by the arm and walks down the main street, past delis and bustling crowds, while describing to him their surroundings. The amalgamation of fast-paced dialogue, swelling accordion/orchestral music, and quick camera movements promotes an intensity for the audience and the man, who is left in a colorful daze of clarity (36:20).

The film thus relies heavily upon core concepts of traditional utopia in entertainment, to consistently provide a sense of what an ideally better world would look like. Without the qualities provided by the series of minor characters, and subsequent idealized-French feel, the extremely utopian element of the film would be lost, and so would the following insight that such an overly utopian cultural artifact can poignantly provide.

Despite the film’s attempt at dreaming up a utopian France, there remains the question of who’s utopia is being presented. By excluding the desires of marginalized groups from this essentially “perfect” imagined-world, those groups’ desires and sufferings are made illegitimate. Therefore, the level of forthright utopia in Amélie, aides in the conveyance of the exclusion of racial and sexual minorities and their struggles in pop media. Not a single racial-minority character is featured, nor is any LGBTQ character, yet the movie experienced astounding success. This is a concept Richard Dyer proposed of all entertainment, as all entertainment harbors secretly utopian elements, and his explanation points to capitalism as the origin for such a lack. It then becomes relevant to note that the communication of cultural entities is currently controlled by a commercial system that relies upon capitalistic determinants for its leaders. And since those who own the productive means for the creation of films are largely rich, white, males, the qualities we desire from pop culture’s depiction of utopia remain unchanged across all forms of it, and the products of pop culture become industrial in their creation.

Amélie provides a uniquely utopian cultural artifact for the observance of how the current capitalistically-controlled pop culture industry denies the validity of minority group sufferings, and their desires for what should be present in a massively better world. Yes, the film is utopian according to the standards we currently hold for entertainment, but in being so to such a large extent, we can see the deficits of our own industry-imposed criteria.