UncategorizedNovember 19, 2016Comments Off on Fake Perfection

Chris Bender came to producers in 2002 with a story. He heard that Tripp Vinson, a close Hollywood friend, had gone mysteriously missing after his bachelor party in Las Vegas. Vinson woke up the next morning in a strip club with an enormous debt to pay. Screenwriters converted the story of Vinson’s bachelor party into a movie script centralized around the idea of having the ultimate night out, and director Todd Phillips signed off on the production of the movie.

In 2009, The Hangover was released, and it was very successful. Famous actors such as Bradley Cooper, Zach Galifianakis, and Ed Helms combined with a laugh out loud funny script produced the tenth-highest-grossing film of 2009. The film won the Golden Globe Award for Best Motion Picture-Musical or Comedy. The Hangover quickly became arguably one of the most hilarious movies ever made. 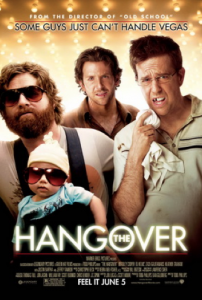 Movie critic Betsey Sharkey from the Los Angeles Times sums up The Hangover perfectly. She says, “there is a sort of perverse brilliance or brilliant perverseness to be found in this story of a bachelor party gone terribly wrong.” The success of The Hangover can be attributed to one thing: stupidity. The movie implements the epitome of idiocy and carelessness combined with crazy, unrealistic situations. The lack of maturity present in this movie is absurd but comical. Viewers watch The Hangover and fall out of their seats with laughter. The movie allows us to temporarily vacate our lives and enjoy 99 minutes of completely isolated happiness. We can enter into this new world of laughter and find pleasure and temporarily free us from our responsibilities and obligations. This sounds like the perfect life, right? Wrong. We may be free from reality, but we immediately return to our boring lives of homework and tests. Our escape to utopia is short-lived.

Through laughing at the Hangover, viewers find a new respect and almost admiration for the characters. They can survive a carefree, reckless night and overcome all their difficulties in the morning. Everything works out in the end, and they had fun, even if they don’t remember it!

However, the movie wasn’t titled The Night Out. It was titled The Hangover. The characters struggle to retrace their steps in the morning. Their “hangovers” are essentially the consequences from the night before. They wake up to find a baby, a tiger, missing teeth, etc. After living recklessly for a night, their responsibilities creep back into their lives the next morning. We laugh as the characters’ attempt to put the pieces together from their night, but what are we really laughing at? Was it their careless partying or was it their attempt to remember what happened? The answer is both. We laugh at how much fun they had, and we almost envy them in these moments of complete chaos and stupidity. Honestly, I wish I could live as carefree as they do, but how realistic does that seem? Their hangover honestly seems like my worst nightmare. They don’t remember what happened and everything seems to be spinning out of control. Anything could have happened that night. However, we find their encounters in the morning more comical than the actual events of the night. As viewers, we consider their crazy consequences hilarious because of their absurdity, but if we were in their shoes, I’m sure we wouldn’t be laughing. The effects of their carefree partying make this utopia unrealistic, yet people continue to try to live the “party life.” The party life is appealing because of its freedom, and we often forget about its sustainability and consequences.

The following clip shows the morning after their night out. Their consequences and problems are very apparent.

I can’t talk about The Hangover without mentioning another movie: Ferris Bueller’s Day Off. These movies center around the idea of taking a break from reality. Ferris skips school for a day, and the four main characters in The Hangover go to Vegas to escape. Tired of going to school or work, all these characters live the party life for a day.

Another similarity between the two movies can be found between Cameron and Stu. Cameron, Ferris Bueller’s friend, was initially terrified of disappointing his father. He would never dare touch his car or disobey him in any way. After spending the day with Ferris, Cameron realizes that he can’t live his life in fear of his father. He ruins his father’s car and accepts that he will take responsibility for it. Now more confident than ever before, Cameron will stand up to his father. In The Hangover, Stu, one of the four main characters, is submissive to his girlfriend in every way. Melissa is controlling and dominant. Stu is scared of her and would never tell her that he was going to Vegas. Upon returning from the wine country he was supposedly visiting, Stu, now with a missing tooth, has to confront Melissa. After she accuses him of never doing what she wants him to do, he’s finally had enough and breaks up with her. Cameron and Stu have revelations during their escapes from reality, and they gain confidence and self-respect.

Does living freely make us more confident? When we are stuck in our realities, are we weaker and more submissive? Do we need to be shown that consequences almost don’t matter? Living carelessly doesn’t make us more confident. It allows us to find ourselves. A utopian world can help us discover who we can be, but this world can’t be sustained. We need a world with boundaries, rules, and work. We can’t take that day off because the consequences never leave. If anything they get worse. In The Hangover, the characters solve their problems and move on. This notion is far from a sustainable reality. We, as viewers of The Hangover, are shown that we can take that time off, but we aren’t shown that we can’t live the party life all the time. We need to be aware of how this movie is preventing us from seeing that the party, careless utopia is not stable and not perfect. The Hangover and Ferris Bueller both provide us with unsustainable fake utopians. Breaks from reality can help us find ourselves, but we can’t afford to give up the work life for the party life.

One example of their problems being solved can be seen in the following clip where Alan counts cards at a casino to pay off their debt. He suddenly gains this ability and doesn’t get caught. Their consequences are fleeting.

Rotten Tomatoes movie critic Justin Strout says, “As if it wasn’t bad enough to be stuck in Las Vegas with these middle-aged misanthropes, The Hangover does the inconceivable disservice of robbing the audience of that elusive sweet spot of GCA usefulness: the drunken escapade.” He is claiming that The Hangover robs its audience of a great drunken adventure. I will agree that some of the consequences present in the movie are a bit extreme. However, all the problems are solved by the end of the movie, which proves the false perfection that audiences are blind to.

Some people claim that you have to live every day like it’s your last because you don’t want to look back on your life with regrets. I understand that we need to make the most out of every day. However, if you treat each day like you will never live again, you probably won’t live to see the next day. Our desire to live every day like it’s a bachelor party is very common. People with the “party life” mentality feel like their jobs are pointless and that they need to get out more. This freedom is reasonable to want, but it is not a sustainable life style. Skipping work to party is seen as a way to live the perfect life, but we often don’t realize that going to work and providing for ourselves is the most desirable life. As humans, we always want what we don’t have and strive to live the lives that we can’t. If we aren’t well off enough to live the party life, we live it for a day and struggle through the consequences. Sadly, it’s human nature to desire this fake perfection.

The design of The Hangover is unique and allows for viewers to internalize its key messages. The movie initially skips over the events of the night out and goes directly to the consequences. Viewers see the problems resolve themselves as we journey with the characters to discover what happened the night before. This gives the viewers an unrealistically positive outlook on their night out. After laughing at what happens to the characters, we are left with accepting that it’s fun to live freely for a night because everything will work out in the end. The jumping forward aspect of The Hangover prevents the viewers from seeing how having a wild night is a representation of a false perfection. We watch this movie and think of the party life as a utopian lifestyle. The creators of The Hangover wanted to create a hilarious movie that exemplified a night out gone totally wrong. However, their movie design ironically produced the opposite effect and allowed viewers to accept the characters’ crazy actions as being socially desirable.

Slap-stick comedies, Ferris Bueller’s Day Off, and the Hangover are all some form of perfection. The characters escape from their work lives in order to live the party life for a day. However, these utopians are not forms of a sustainable lifestyle. We can’t skip out on our responsibilities and get wasted. The party life, despite how appealing it seems, is not a true form of utopia. The Hangover is a representation of a fake perfection. It’s an unattainable lifestyle that is extremely desirable because of its seemingly utopian nature.