Racial Undertones in Pop Culture and their Divisive Impact on Viewers

UncategorizedDecember 16, 2016Comments Off on Racial Undertones in Pop Culture and their Divisive Impact on Viewers

Happy Feet seems to be a pleasing and lighthearted children’s film about bravery and independence. The film tells a story about a penguin named Mumble who is excluded by his fellow Emperor penguins because he is unable to sing as they can. Mumble can only dance, and the other penguins dislike him for this difference. Eventually, however, Mumble and some other outcast friends are able to resolve the famine that plagues the penguins by convincing humans to stop fishing in the area, an achievement that is rewarded with acceptance back into Emperor Land. While seemingly positive and pleasant, Happy Feet is grossly misunderstood, as it is actually shadowed by deep racial undertones. Racial scripts are thus present in popular movies like Happy Feet, but what are their implications?

The image of whiteness is a complex matter. Aside from appearances, white identity is a complex and pervasive web that frequently evades recognition (Leonard 224). This is largely because whites are not limited by their race– white privilege– so there theoretically are no obvious white properties to be named (Dyer 39). Furthermore, the differences that are brought forth relegate whiteness as a cultural norm, rather than as a race like all others, which are simply diversions from it (Dyer 1, Ilmi 219). Happy Feet therefore racializes by presenting characters with non-white-esque characteristics that seem far removed from white culture.

The most obvious racializing in Happy Feet is of Hispanics. Mumble stumbles upon a group of outcast penguins named Ramon, Raul, Nestor, Lombardo, and Ronaldo who have nicknamed themselves “The Amigos”. The Amigos all have hispanic accents and speak with slang language (“Kiss it [my ass]”, “Come on, bro”, “You’re loco, man” (Happy Feet)). The Amigos also resemble stereotypical hispanics in their appearances; they are short and fat in comparison to the Emperor penguins. The Amigos are clearly meant to represent Hispanics within the penguin community; they are therefore outcast from Emperor Land. 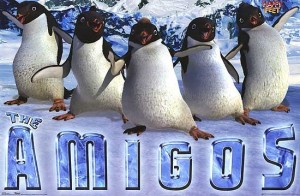 Several other minority groups are also represented in the penguin world of Happy Feet. There are a group of darkly colored hawks that speak with stereotypically African-American accents; furthermore, this group is quite violent in that they try to kill Mumble and attack one another in pursuit of the meal. There is also an outcast penguin who claims to be a fortuneteller– he has been “bestowed by magical beings” with a “sacred” plastic 6-pack wrapper around his neck. In the end, however, he is exposed as a fraud; this appears to be an attack upon Native Americans and their emphasis on spirituality. Yet another racialized animal group comes in a group of elephant seals who have long, sac-like noses that strongly resemble penises, which they suck until a white, cum-like substance sprays Mumble and the Amigos in the face (Happy Feet). These elephant seals are portrayed as not only unabashedly foul, but also as seemingly queer.

Mumble is also thrown into the group of outcasts, in part because of his coloring, which is much less distinct than the clear, divisive lines between black and white skin of the other Emperor penguins. Although he is technically white, Mumble is not “pure” like the emperors, who are able to distinguish themselves clearly from the “minority” penguins, like the clear-cut colors on their backs. There is one scene in particular that highlights these color differences; at the penguin’s school graduation, the graduates toss some of their cleanly white feathers in the air, while Mumble’s lone grey fuzzy feather floats sadly on the wind (Happy Feet). This color contrast adds to the list of characteristics that inferiorize certain penguins in Happy Feet.

While Happy Feet typifies non-whiteness in penguins through their language habits and physical appearances, whiteness is much more difficult to represent. White people are not limited by their race because of white privilege; since race is most obviously biological and of the body, this also means that white people are not contained by, or limited to, their bodies. “Above all, the white spirit could both master and transcend the white body, while the non-white soul was a prey to the promptings and fallibilities of the body” (Dyer 23). This bigger-than-the-body white ideal has also been furthered by the principles of Christianity. “Not only did Christianity become the religion, and religious export, of Europe… it has also been thought and felt in distinctly white ways for most of its history… It posits that somehow there is in the body something that is not of the body which may be variously termed spirit, mind, soul, or God” (Dyer 17, 16). Whiteness has come to be associated both with Christianity and with the ability to transcend the body.

Penguin hierarchy in Emperor Land is determined in both of these ways. The head penguin speaks religiously in sermons, and is named like so as Noah. He says things like “our forefathers forsook our flippers”, and encourages the other Emperor penguins to be “sincere in their praise” while leading them in chanting prayers (Happy Feet). He also speaks with a Scottish accent, which epitomizes him as belonging one of the “most white” nationalities. These types of Christian and Scottish similarities bring along connotations of “whiteness” such as purity, holiness, and cleanliness of blood– none of which are present in any way in the Latino-esque group of penguins.

The Christian, and therefore white, ability to transcend the body is also highlighted in Happy Feet. The penguins of Emperor Land believe in the power of “heart-songs”, which are songs borne naturally to a penguin’s soul. The quality of a penguin’s heart-song and of their singing voice plays a big role in their social status; at one point, onlooker penguins say “A penguin without a heart song is hardly a penguin at all” (Happy Feet). The deeper significance of a beautiful heart-song and voice, however, is the ability to leave the body through sound, which is a distinctly white characteristic. Mumble, therefore, is a lesser penguin because he lacks the fundamental white trait of body transcension in his lack of a heart-song. This is also how he gets his name; to mumble is to fail to expel a sound successfully.

Mumble is stuck inside his body, so he is forced to turn to dancing to express himself. Dancing, however, is something that in modern culture is associated with minorities, particularly latinos and blacks. “White people can’t dance”– a superficial joke about white people, but it points to the fact that blacks and latinos can. This logic also applies to modern sports, as African-Americans are typically seen as more athletic than whites (Leonard 220). These forms of expression imply bodily trappings in the case of non-whites. Mumble, cast as an outcast alongside the minority-resembling penguins, is chastised by his father, “I wouldn’t do that around folks, son… it just ain’t penguin, okay?” (Happy Feet). Mumble’s dancing resembles the bodily trappings of non-whites, therefore making him an inferior penguin in Emperor Land.

These differences serve distinct purposes in Happy Feet; they make the non-Emporer penguins seem so far from the Emperor penguins that they are outcast until the very end. The minority penguins are eventually accepted into Emperor land, but only after they are able to stop humans from fishing in their waters, thereby proving themselves as worthy of acceptance to the Emperor penguins. This theme is recurring in many popular and children’s movies; How to Train Your Dragon, for example, tells the story of a Viking boy who is outcast for his favorability to a jet-black dragon– a color choice that likely presents racial undertones– until he unintentionally assists the Vikings in discovering the dragon’s nest, thereby proving his worth despite the unusual company he keeps. In addition to the setup for a later acceptance, another purpose of differentiating certain characters is to provide for the trivialization of their roles. Happy Feet’s tendency to incorporate minorities in an insignificant way, for example, resembles Laura Mulvey’s argument about women; “The presence of women is an indispensable element of spectacle in the normal narrative film, yet… ‘In herself the woman has not the slightest importance’” (Mulvey 398). Characters such as the homosexual elephant seal and the seemingly African-American hungry hawks exist purely to make the viewers laugh, but their insignificance also contributes to the racializing in Happy Feet. 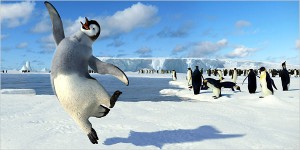 Laura Mulvey argues that modern movie technology and director choices have become so developed that movies can feel like real experiences for viewers. She describes Hitchcock, “[the] hero does see precisely what the audience sees… Hitchcock draws the spectator’s deeply into his position” (Mulvey 401). This state means that viewers are easily imprinted upon, and this viewing lens is equatable to a “white gaze” through which minorities are depicted as racialized others (Ilmi 218). Films “construct social meanings… ‘Media culture also provides the materials out of which many people construct their sense of class, of ethnicity and race… of ‘us’ and ‘them.’ Movies manufacture the way we see, think of, feel and act toward others’” (Leonard 223). It is through the often unrealized power of the media that pop culture is able to adjust viewer’s attitudes towards race.

Viewers absorb lessons from and are impacted by movies they watch (Mulvey); in the case of race, pop culture often increases viewers’ propensity to see minorities as “other” by highlighting differences; Happy Feet does this through bodily appearances, the ability to transcend the body, accents and language tendencies, and the need for those who are different to prove themselves as worthy of acceptance. “Mass culture is the contemporary location that both publically declares and perpetuates the idea that there is pleasure to be found in the acknowledgement and enjoyment of racial difference” (Hooks 424). Identification and emphasization of differences between people– even meaningless ones that have nothing actually to do with biology– feature in pop culture far more frequently than viewers realize. The presence of this ideology in pop culture consequently plays a big role in influencing race in modern society– often in negative, divisive ways. Those whose differences are highlighted in popular movies, “whose image has continually been stolen and used for this end, cannot view the decline of the traditional film form with anything much more than sentimental regret” (Mulvey 403).