UncategorizedNovember 18, 2016Comments Off on Take Cover: Solace In Utopia

Cultural criticism finds itself faced with the final stage of the dialectic of culture and barbarism. To write poetry after Auschwitz is barbaric.

Totalitarianism. Aryan soldiers; a Jew in hiding. Conformity; defiance. Brutality; survival. War fiction has continued to flourish as one of the most popular genres, especially to the audience of young-adults, of novels and film. These narratives are packed with the passion of patriotism, the horrors of violence, and the rawness of human experience. A state of war reflects a metaphysical, and physical, extremity of existence, which perhaps drives our fascination towards stories inspired from it. For the majority of the current young-adult population, it is unlikely for us to experience anything close to the realities of WWI and WWII; our only medium to the period is through fiction and our imaginations. This year, according to vice president and publisher of Scholastic David Levithan, “We’re seeing more publishing on [historical fiction on WWII] than we have ever before.” Various colleges today even hold courses dedicated to intensive analysis on the phenomena of utopias and dystopias, which perhaps is ultimately indicative that we, as consumers of stories, are drawn towards worlds outside of our own realities—the more extreme and different, the more we are lured into them.

German philosopher, Theodor W. Adorno, in his collection of essays Prisms, discusses cultural criticism and society, and specifically alludes to Nazi Germany to illustrate his point. He claims that the modern world is becoming increasingly like “an open-air prison,” suggesting an overarching system that holds the façade of free will for the people, but in actuality is carefully manipulated and controlled. This concept is also made clear in a different essay of Adorno’s that disproves free will and choice, and that the “culture industry,” as he phrased it, is in extensive control. Adorno goes further in Prisms to claim that “to write poetry after Auschwitz is barbaric.” This is to say, there must have been a path of culture that paved the way towards the brutality of Nazi rule—the deteriorating economy, the volatile political climate all contributed to the state of society and culture of the time. Here, Adorno is saying that to continue on that path of culture after such an atrocity to humanity like the Nazi regime would be a detriment to human society. Various analyses of culture claim that the homogenization and uniformity of society are problematic. It is robbing us of the true value of the ideal form of culture. The “culture industry,” as coined by Adorno and fellow German philosopher Max Horkheimer, mass-produces a standard program of socially accepted products of culture. This heavily controlled and systematic depiction of culture and society is paramount in totalitarianism. This is why it is valuable to examine war literature. Why does the readership of such a gruesome period of history continue to grow? I claim that even in the most heartbreaking, dire, and barbaric stories, there exist pockets of utopia that reflect our desires to see change, onto which we latch and by which we become engrossed. 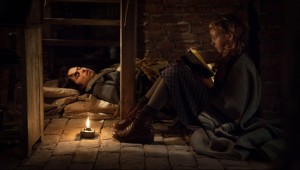 The Book Thief by Australian author Markus Zusak is a prime example of war literature that has consistently received high ratings. In 2013, the novel—first published in 2005—was depicted on film, directed by Brian Percival. The story, narrated through the perspective of Death, follows the young female protagonist, Liesel Meminger, a German girl who is sent away to Molching in the heart of Nazi rule because her mother, a Communist, is in danger of Nazi removal. From the beginning, Liesel is depicted to be a thief of books; she steals The Gravedigger’s Handbook during the burial of her younger brother when he dies of disease. The commodity of books comforts Liesel though she is illiterate. This proves to become an important, binding theme of the novel. Her foster parents, Hans and Rosa Hubermann, each their own distinct characters, share a genuine, unconditional care for Liesel. They enroll her in the Hitler Youth and Liesel assimilates into Nazi culture. Even though we see the Hubermanns exhibit internal conflicts to Nazi ideology, ultimately, they abide by the totalitarian regime out of necessity for survival.

Nazi book-burning ceremony on the streets of Molching

A poignant moment in the novel occurs during a Nazi book-burning ceremony, which Liesel and Rudy, her Aryan neighbor and classmate, attend with the Hubermanns and the entire town of Molching. They stand amidst the crowd under the surveillance of Nazi soldiers. Liesel is distressed by watching the books disintegrate in the body of flames before her, and is later further provoked by the coercion of a classmate to throw a book in herself. It is clear that being unpatriotic or at odds with Nazi beliefs would lead to being socially ostracized. Rebellion is a clear threat to one’s survival. After the crowd and Nazi officers leave the scene, Liesel steals a book from the pile of ash and tattered pages. In this moment, defiance highlights the seizing of control back from an oppressive system. This is what unlocks utopia. In a totalitarian society, such as Nazi Germany, personal control is taken away and all the facets of life, including culture, lay in the hands of the state. The books that Liesel steals as the narrative unravels serve as constant indicators of her holding onto something that the state repeatedly tries to take away—as illustrated by book burning ceremonies. She insists on clinging onto the prohibited, suggestive of her personal desires for an alternative reality. This is the essence of utopia. Acting upon these feats of resistance, against a dangerously powerful organization like the Nazis, for the majority can only exist as a fantasy. But, that desire for change is indeed real.

Liesel steals a book from the pile

The symbolism of books for Liesel is a thread that runs across the narrative and is depicted beautifully in the film rendition. One of the most memorable moments of the story occurs when Liesel delivers laundry as part of the Hubermanns’ business to the mayor of Molching’s house. Back during the book burning ceremony on the streets, Liesel is in fact unaware that the wife of the mayor, Ilsa Hermann, spotted her steal the book from the pile. Frau Hermann descends from the grand wooden staircase to bring money to Liesel for the laundry service. She recognizes Liesel immediately as the book thief. She stands formidably with a stoically stern look and utters, “So, you like books?” Liesel is instantly anxious and fearful that her cover has been blown. But to the surprise of both Liesel and the audience, Frau Hermann walks to the adjacent doors and opens them to mayor’s private library and invites Liesel in. A panorama of classic, polished, wooden bookshelves glisten from the golden raised bands in the warm light of antique lamps. The cinematic, simplistic piano melody that accompanies the scene highlights the stark segregation between the pristine sanctuary of the library and the ramshackle streets decorated with Swastikas. This is an imperative moment as it physically captures the dichotomy Liesel experiences during the war. She suddenly has a whole collection of things to affirm her inner desire to hold onto what she believes in, despite it being against the tyrannical system. It is a statement of her utopia, expanding it and adding weight to it. It gives Liesel—and the audience—hope.

Later in the novel, in the height of war and Nazi control, the Hubermanns take in a Jewish fist-fighter, Max Vandenburg. The character development of Max also offers many examples of utopia. During his escape from home to the Hubermanns’, Max’s saving grace is Hitler’s autobiographical book Mein Kampf, which he uses as his fraudulent stamp of being German. As Max and Liesel become closer, she visits him more and more in the basement where he resides and together they develop a love for words and stories. Max covers the pages of Mein Kampf with white paint and handwrites a story for Liesel in its place. This act itself is utopian. He recognizes he doesn’t need his saving grace to convince the outside world that he is German anymore because the basement is his new reality and future. He literally paints over, overtly rejecting and silencing, the voice of the most powerful figure of Nazi Germany, trashing the ideologies of the system to instead scribble in his own thoughts and doodle complementary cartoons. Max knows that there will be no consequences because there is no one to apply the consequences to him. He turns the dark truth that he is stuck in a basement, his existence essentially extinguished, into a medium to act out in his own form of defiance. In a scene with Liesel, Max teases her when she is being secretive, encouraging her to let him in on the secret by chuckling, “Who am I going to tell?” The irony of Max’s lightheartedness about his grim reality is utopian.

The dense stories of war fiction crave such moments. Reflective of a natural coping mechanism, we orient ourselves towards optimism in the face of grave seriousness; or, at the very least, a distraction. We generate an internal world in which we have control and in there, we unleash our inner desires. War literature lets us in on these internal worlds of minorities, the victims, groups that were oppressed by tyrannical rule. To return to Adorno’s quote that “to write poetry after Auschwitz is barbaric,” we see that in war literature, authors with the benefit of hindsight make an active choice to include utopian moments of victims to underline a revised form of “poetry,” aligning with Adorno’s claim. As historian Stephen Greenblatt stated, “Great historical novels provide a powerful hallucination of presence, the vivid sensation of lived life.” It is a reconstruction of black and white fact, colored in by serious, human fantasies. By illustrating that even those in the derogated portion of society, plagued with trying war times, could hold onto the desire for an alternate reality, “poetry”—that is, culture—can continue to exist after such an inhumane regime, without being a detriment to society. The example of war literature in application to current society is perhaps to show us that a controlling world, obviously not the same degree of extremity, where a “culture industry” persists, ignites rebellious desires in us to overturn such homogenization in order to cope with our reality.