The Power of Laughter

UncategorizedNovember 18, 2016Comments Off on The Power of Laughter 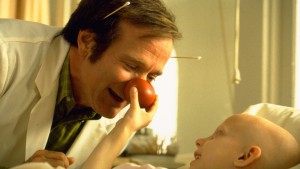 Laughter, in its purest form, is the best indication of happiness within a person. Laughter can bring people together, make someone feel better, and even increase someone’s quality of life. It is a natural healing agent that is vital to a person’s well-being. It is not just some meaningless reaction expressed as way to “cheat happiness” like Theodor Adorno believes, but rather an uncontrollable release of joy inside that person. They might not always be happy or have an overall happy life but all that matters is how that person is feeling in that exact moment. In the movie Patch Adams, which is based on a true story, a doctor named Hunter “Patch” Adams treats patients by not only giving medical treatment but also by healing them through laughter. As he says repeatedly in the film, “laughter is the best medicine”. Of course, people can’t just receive laughter as a treatment, but the laughter he prescribed drastically improved his patients’ overall quality of life by relaxing them, lowering their blood pressure, decreasing the amount of pain they’re experiencing, boosting their immune systems and many other benefits. Laughter gave these people hope and a reason to fight off their diseases. The patients were able to live more comfortably and enjoy their lives much more because of it. For them, laughter wasn’t just some meaningless action to disguise the fear within them or a quick break from the pain they were experiencing, they laughed because it showed that even in their time of pain and suffering there could still be happiness buried within them. This happiness allowed them to enter a new world where they were freed from the restraints of their current ailments.

According to Mikhail Bakhtin, there are two worlds that we live in; one “official” and one “non-official”. The “official” world is our everyday lives while the “unofficial” world is one that is completely different from the “official” in that it follows no rules and anybody could be anyone. As Bakhtin says, “[the carnival culture] offered a completely different, nonofficial, extraecclesiastical and extrapolitical aspect of the world, of man, and of human relations” (84). By living in this “unofficial” carnival world people can strip themselves of the stress, pain, frustration etc. of the world they live in and adopt a new culture, a new world in which they can be anything they want. It is not just some show they go watch or some book they go read to escape their world. It is something they go live, something they go to experience with others. It is embraced by everyone who goes and lives it. It is a world filled with all different kinds of forms of expression and art. Bakhtin describes carnival as a balance of art and life, “It belongs to the borderline between art and life. In reality, it is life itself but shaped according to a certain pattern of play…Thus carnival is the people’s second life, organized on the basis of laughter” (86). Therefore, if carnival is life itself and is organized on the basis of laughter then that means laughter organizes life itself. Laughter is what people use to create a better world to live in. It isn’t a “sickness infecting happiness…drawing it into society’s worthless totality” (112) as Adorno believes it to be. Rather, laughter is life, it’s what life is built from, it gives meaning to life. 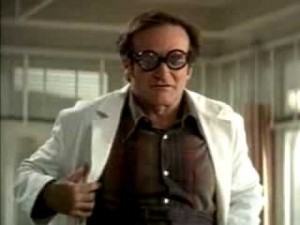 In Patch Adams, we see clearly how this is put in effect the real world. Patch creates a homemade hospital where he treats people who can’t afford a real hospital. There he treats people both with real medical treatment and with jokes, happiness, and joy. In a similar way of how carnival is a borderline between life and art, Patch balanced medical treatment with laughter. This balance, although very unorthodox, proved to be very effective. In the movie, the nurses said that since his arrival to the hospital, patients’ optimism greatly increased and the amounts of medication required decreased. The laughter and joy that was given to them through Patch significantly increased their wellbeing and improved their lives. He had such a tremendous impact on the patients’ lives that, even in times of tremendous pain and suffering, he was able to bring out true happiness from within them through laughter. This sort of practice was very different from the one that was common in that time.

The hospitals and doctors of that time were very disconnected from their patients. As shown in the movie, patients were referred to by their room number or bed number or the disease they had e.g. “patient 205” or “the cancer patient”, but Patch believed that there should be a personal connection between the doctor and patient: he believed that instead of calling the patient by a number or disease, doctors should call them by their name, get to know them, and understand the difficulties they are going through. He adopted a very carnivalesque culture in which doctors are not above patients but on the same level. He says in the movie “everyone that comes into my house is both a doctor and a patient”. He believes that patients can learn from doctors just as much as doctors can learn from patients. In essence, when you stepped foot into his hospital, you entered a hospital that embraced a carnival culture built on laughter. It may seem that this laughter was only temporary and that it only was a quick escape from their real lives of pain, but it functioned as something much more than that. 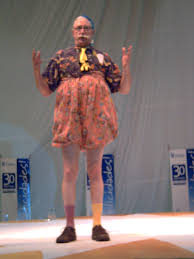 Adorno believed that laughter is a “sickness infecting happiness” when in a false society but, as previously mentioned, Patch Adams’ hospital isn’t like the real world: when people enter it, they enter a new world. So, according to Adorno, laughter is just an escape from one’s reality. People only go to temporarily escape their reality, but, at the end of the day, they are still in pain and are suffering from a disease or mental health disorder. The people are scared of death so they go to the hospital to relieve their fear. He is basically saying that they are never truly happy because they are constantly fearing their lives and the laughter they experience is fake laughter, it is just a cover up for the terrible lives they are living. This argument is very far from the true reality of things.

Happiness can be a transient feeling. No one can constantly be happy, but at the same time, no one can constantly be sad. Some people may feel sad or happy more times than the other but they are not constantly feeling that emotion. To say that laughter is a consolation prize for not having a life worth living is very narrow-minded. Throughout the course of life, people experience all different types of emotion, and all these emotions at points in time add up to equal the overall quality of life for the person. Although, at a single point in time, you can’t tell if a person’s overall quality of life is good or bad, those moments will all add up to something that shows a person’s life is worth living and through the laughter they experience, they will ultimately have a life worth living because their temporary breaks from the real conditions of their lives aren’t just breaks.

A break has no meaning; it is something to just stop the thing you’re doing. This second world the people go to is much more than just a break; Bakhtin describes it as, “something must be added from the spiritual and ideological dimension. They must be sanctioned not by the world of practical conditions but by the highest aims of human existence, that is, by the world of ideals” (87). In order for something to be not just a break, but an actual second world, it has to have an ideological meaning that is spiritual. This is exactly what Patch offered. Bakhtin is saying that people going to Patch’s hospital transcend their reality and live in a world where they can all be equal and a world where they are not described by their disease but treated and respected as human beings. They were liberated from the restraints that the real world put on them and went to a world where everyone was equal, i.e. everyone is both a doctor and a patient, and built their relationship off laughter and joy in one another. Patch Adams shows that the patients laughter isn’t just a consolation prize because, though they are sick with disease, their laughter is actually proof they do live a life worth living, proof that their moments of laughter and happiness will add up to something that will transcend the boundaries placed down on them from the real world and free them in the second world they go to live in. This proof is shown countless times in the lives he was able to heal and the joy he placed in the all the souls he touched. People were able to recover more quickly and more easily because they were able to laugh and increase their overall quality of life. Laughter isn’t cheating happiness but rather builds happiness towards a life worth living. 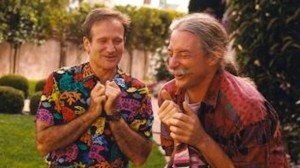 In Patch Adams, a second world is created that isn’t just a break from the real world but rather a place to transcend the real world and get rid of fear, anger, and pain. Patch creates a world built on the foundation of laughter to spread joy to others. This laughter isn’t fake, it isn’t something foreign, it isn’t an emotionless action that they only go to when they don’t receive what they desire. The laughter experienced is pure: it is something that is inside all of them, within all their pain and suffering that, when reached, can lead to the betterment of their lives and create a life worth living.